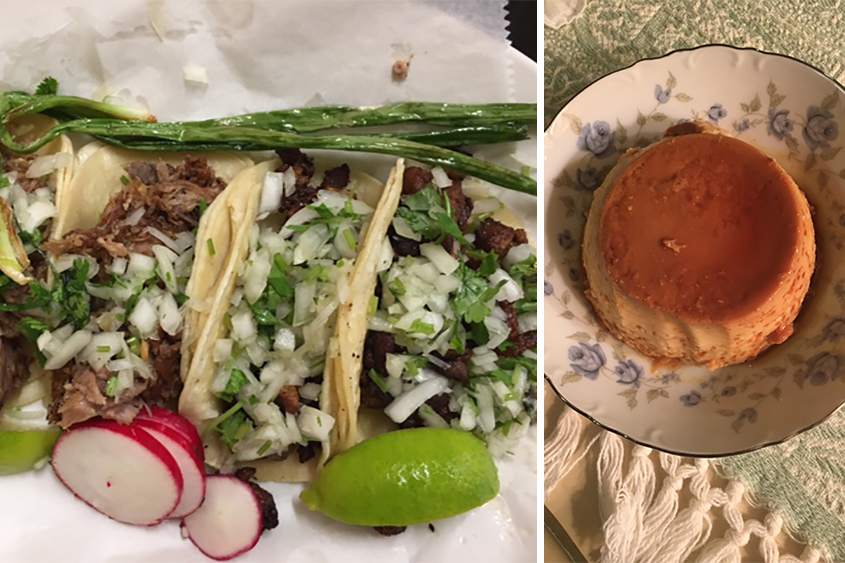 At the table: home cooking brings a taste of Mexico to the Ballston spa

Yes, on Doubleday Avenue you will find corn husks for tamale making, Mexican sweet bread packets and Paleta Payaso, marshmallow and chocolate treats for the kids.

At Taqueria Guadalajara, a new restaurant in Ballston Spa, you can dine in, grab or buy a few groceries, and whip up your own Mexican feast.

Taqueria is in the space next to Dunkin Donuts which was once Alaturco Mediterranean Grill. On Friday night when we walked in we recognized the tangerine walls, shiny wooden floors and stylish light fixtures, but now there are decorative painted pigs on the windowsill, a guitar and a Guadalajara flag on the walls and the aforementioned groceries, neatly stored at the back of the room.

Still nervous about COVID, we selected a table for two about 15 feet from the closest of the other seven tables.

A minute later, a young lady rushed over to take our drink orders. Alcoholic drinks are not available, but you can have a Mexican Jarritos soda or a horchata, a rice pudding drink that I fell in love with when I lived in San Diego. This horchata was light and not too sweet.

“We make our own horchata,” she said.

The free tortilla chips were hot and crisp, and my husband praised the salsa.

Doing justice to the name “Taqueria”, I wanted to try the tacos, four for $ 10, which can be ordered al pastor (marinated, grilled pork) or with chicken, carne asada (steak), chorizo ​​( sausage) or carnitas (pulled pork).

“Yes, you can do two and two,” said the waiter.

I decided to get out of it and was glad I did. The four hot double corn tortillas were generously stuffed and the smell of marinated meat wafted from the plate when it was placed in front of me. The carnitas (pulled pork) were tender, the al pastor nuggets had chunks of pineapple mixed together, and the four tacos were lavishly topped with chopped onions and cilantro. To further enhance the experience, the dish was accompanied by a pair of fatty lime wedges, grilled green onions, radish slices, cups of thick green sauce and hot red sauce, and a paring knife. robust steak. After dressing them, my tacos were so juicy and gravy that I had to lean over the table to eat them.

My husband opted for a quesadilla carnitas, a large flour tortilla wrap that was cut into quarters. After the dish arrived, he was so immersed in his food that I had to give him a comment.

“Very satisfying,” he finally replied. “And the guac is perfect.”

Snatching a big bite from the edge of his quesadilla, I found it sweet and cheesy, and even better when slipped into the smooth, thick guacamole, which was apparently homemade with lime juice, then fresh Mexican cream.

All the food is prepared by Gilberto and Patricia, the owners, and they only use Qaxaca cheese, a semi-hard white cheese with a texture similar to mozzarella.

My husband was delighted that his quesadilla was not covered in cheese and that it was served with salad and that my tacos did not contain cheese. Both meals seemed lighter, fresher, and less gooey than what you might encounter at other Mexican restaurants.

And the menu goes way beyond tacos, as the couple also make tamales, burritos, tostadas, sopes (fried masa with toppings) and tortas (a Mexican sandwich made from crusty bread) as well as side dishes. chili toreados (roasted hot peppers) and cebolitas (grilled shallots). Vegetarians will be challenged, as meat dominates the menu. Adding a bean burrito to the menu would solve this problem.

Because I’m crazy about fish, I asked about Mojarra Frita, a whole fried tilapia, which wasn’t on the menu but was featured on Facebook as a weekend special.

It seems that word is spread about this place; as we were getting ready to leave, a line of people was waiting to pick up or order take out.

We couldn’t finish our meals and packed the rest with two servings of flan for dessert.

At home, I slid the dome of pale yellow custard into a pretty porcelain dish, drizzled with caramel sauce, and sat in a comfortable chair with a cup of tea.

Oh my! This custard was so tender and eggy; as good as the custard my mom made.

More from The Daily Gazette:

Categories: Food, Life and the Arts

Can graduate students get loans?