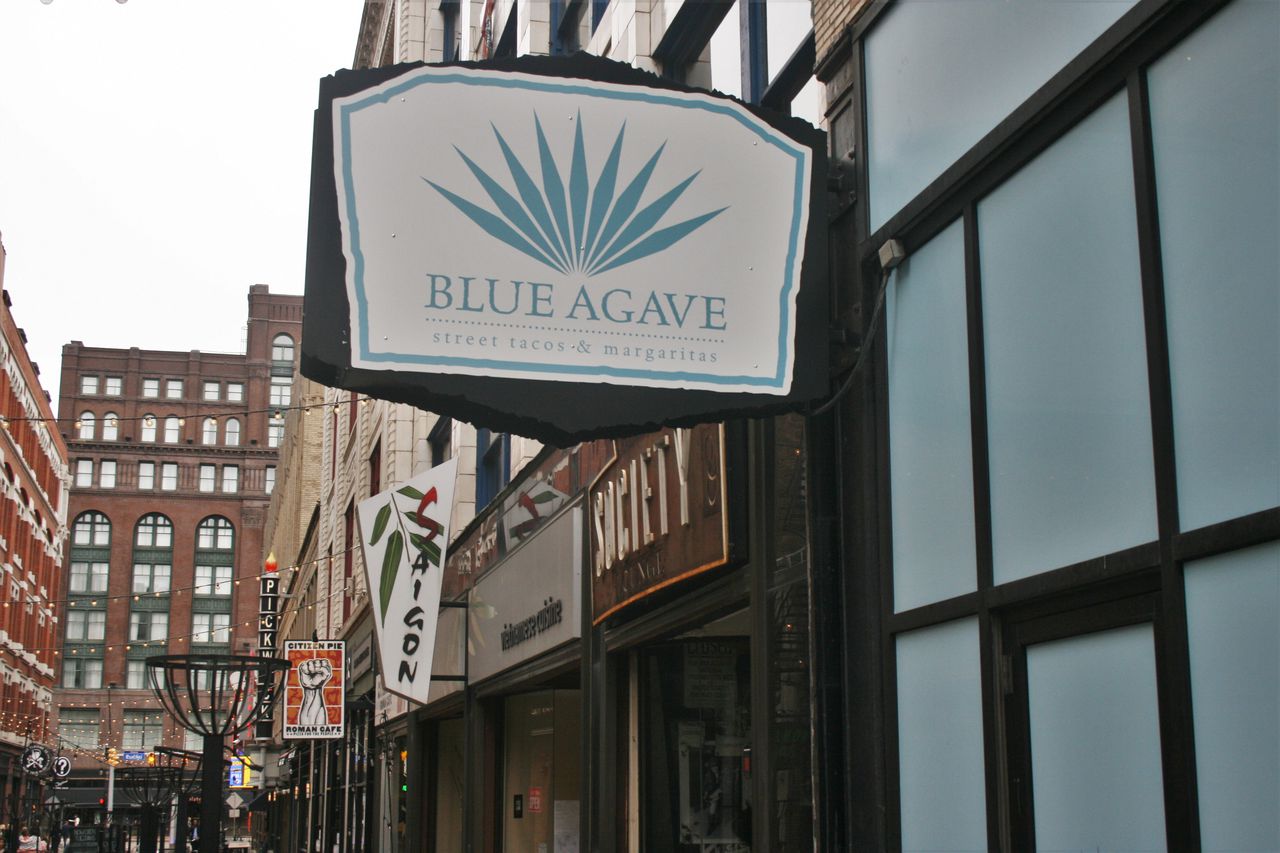 The restaurant grew out of the partnership of restaurateurs behind other Mexican restaurants in northeast Ohio, including Tres Potrillos, Tito’s Mexican Grill, Tacologist, Blue Habanero, and Fiesta Jalapeno’s. The group also recently purchased two spaces in Boston, aiming to open Mexican restaurants there this year.

The number of restaurants owned by J. Arturo Martinez, J. Alejandro Martinez and Guillermo Ayala has grown significantly over the years. Currently, the trio owns 28 restaurants, with five more on the way before the end of 2022, Arturo said.

Most of these restaurants are based in northeast Ohio. Now, with Blue Agave, they have a business in the heart of downtown Cleveland at 2073 E. 4th St.

As with the team’s other designs, Blue Agave represents the owners’ cultural backgrounds.

“We try to represent who we are in this concept,” said Alejandro. “We want to be able to represent our Mexican heritage.”

Inside Blue Agave, you’ll see accents of blue throughout, with clean white tables and chairs. The chic interior design complements the existing structure of the restaurant space, with lights hanging above the dramatic spiral staircase leading to the ground floor. A front patio will be used during Cleveland’s warmer months.

Expect a dining experience that veers high-end at Blue Agave — and a menu that includes tacos, fajitas, burritos, and other crowd favorites. The highlight is Blue Agave’s drink menu, which features margaritas made with fresh fruit and agave nectar.

“In our signature drinks, we don’t use any blends. We use fresh fruit that we squeeze when we make these drinks for you,” Arturo said. “We are very proud of what we do. This is the highlight of the menu.

“To be honest, the concept became a fusion between Tacologist and Blue Habanero. We came up with the idea for Blue Agave,” Alejandro said. “We wanted to make sure we had a smaller menu, with good options for the crowd to come and see the Guardians or the Cavaliers – they can come in, have a nice drink, can eat before or after the game.”

De La Rosa, Arturo and Alejandro all met while working at Ayala’s Tres Potrillos location in Montrose. In 2011, the three worked as waiters and bartenders.

“We started at the bottom — the servers, in the kitchen — working our way up to the people running the place,” De La Rosa said. “We want everyone to grow. In many companies, you don’t get the same opportunity; you always stay a server downstairs. But that’s what we’re doing here. We want to bring people into the business if they are willing to learn.

The opportunity to land a concept at East 4th Street opened up last year, building on conversations between Arturo and MRN Ltd partner Ari Maron. Maron let Arturo know that Zocalo was going to close about six months ago and asked if Arturo and his team would be interested in bringing a new concept to the space, Arturo said.

The idea was born shortly after the group opened El Palenque in Brooklyn, where La Casa Tequila once stood. The timing worked for the team, Arturo said.

“We’re not happy when someone else closes of course, but it was a good opportunity for us to take restaurants that closed and we turned them into our locations,” Arturo said. “Last year was the best year for us since we’ve been in business.”

The team hadn’t planned to enter East 4th Street, an area known for its restaurants and bars, but the opportunity couldn’t be passed up. Alejandro said he visited East 4th Street and Zocalo years ago and never imagined taking over a space on the coveted downtown stretch.

“I believe the beauty of this country is that if you really want to have it, you can have it if you’re willing to work for it,” Alejandro said. “I never thought we would have this place in my life. It’s incredible. You work for it, and it will come.

Get the weekend off to a good start and Register for cleveland.com weekly “In the CLE” email newsletter, your essential guide to the best things to do in Greater Cleveland. It’ll hit your inbox on Friday morning – an exclusive to-do list, focused on the best of weekend fun. Restaurants, music, movies, performing arts, family fun and more. Click here to subscribe. All cleveland.com newsletters are free.