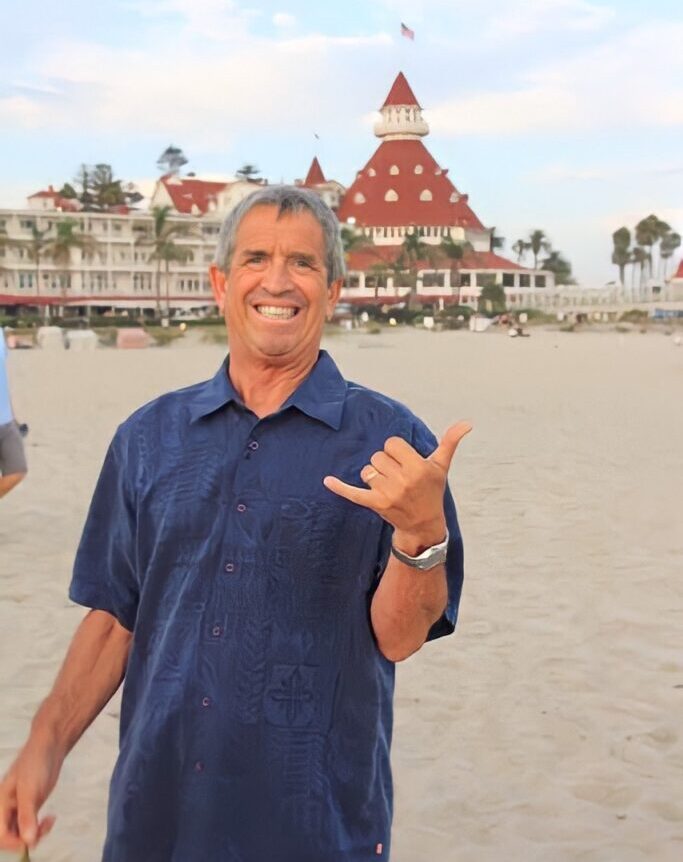 Brant Sarber – founder and owner of two beloved local restaurants, Island Pasta and Costa Azul – died peacefully on February 24 at his longtime home in Coronado. Two days before his birthday, Brant would have turned 63. The Sarber family would like to express their deepest gratitude for the community’s outpouring of support in the face of this unexpected tragedy.

Brant’s warmth and compassion were palpable to all who knew him, and especially abundant to those who had just met him. Her infectious smile and laughter, quick wit and charm inspired those around her to become better people. The proverbial local, Brant never left Coronado and always lived within four blocks of his childhood home on Tolita and the Pacific Ocean. He was a unique and caring person who touched the lives of all who knew him as he forged his frequent daily circuits between restaurants, sharing his broad smile, generosity and warm vibes with everyone he met. .

Brant began working at the iconic Coronado Chart House at age 14, working his way up from busboy to popular bartender, where he held court and hosted his informal comedy routines for thousands of people for many years. whom he called all his friends. from their first meeting. His dream of opening his own restaurant came true in 1994, when he transformed the Oriental Arts on the corner of Loma and Orange into a pasta and pizza restaurant, pouring his energy into creating a meeting place where ” everyone knows your name.” For those of us who knew about his love of bargains, Brant took advantage of Coronado High School’s gymnasium renovation, repurposing the wooden floors in what became the horseshoe bar and a place where strangers can become friends. Officially open the 4th of July weekend, Island Pasta’s homemade comfort food and friendly atmosphere was a big hit from the start, serving fresh homemade pasta and thin crust pizza. Brant was steeped in the history of the Sarber family’s SEAL team, and BUD trainees immediately took advantage of his first marketing idea for “all-you-can-eat, high-carb pasta” for all Navy members. The success of Island Pasta laid the groundwork for Brant to begin incubating a larger vision, and within five years he embarked on his next goal of securing a larger restaurant near Island Pasta.

Longtime Coronadans will remember Krishna Mulvaney (Captain Jack’s then briefly Cecil’s) at 1031 Orange Ave. When the big space became available to rent in 1998, Brant jumped on it with the excitement of a billionaire lottery winner and set to work seeing his phoenix rise from the kitschy ashes of the old restaurants. The family marveled at Brant’s latent interior design skills, mixing frugality with lighting, fabrics and colors with nods to local coastal touches. Auctions, trips to Mexico and encounters with artisans pollinated his vision of creating a Mexican-style restaurant that could accommodate large families and gatherings with enough space that allowed him to return to his Chart House roots. setting up the biggest bar he could find. The phrase ‘one man’s trash is another man’s treasure’ came true for Brant, as he ripped two huge bars from a shuttered La Jolla restaurant, brought in colorful Island surfboards Surf, was designing blue chandeliers with a Tijuana glass blower and original wood. Rosarito Beach chairs. One of the hardest workers in town, Brant put in countless hours and developed his entrepreneurial skills as he slowly turned his dream into a reality, opening Costa Azul in January 1999. The casual Mexican restaurant quickly became l one of Coronado’s most popular restaurants. meeting places, with its chameleon quality appealing to all ages and types at all hours of the day and night. Families grew up here, chance relationships turned into marriages, musicians got their start, and the glue that binds the soul of a community by virtue of place is born.

Brant connected emotionally with the people he met in a genuine, witty way and he treated everyone with kindness – from his customers, employees, contractors, city permits, police and local civic organizations – – all becoming an extended family that weren’t necessarily blood relatives and growing exponentially over the years. Brant’s popularity was truly central to the success of his restaurants, and he worked hard to instill his philosophy of kindness in his employees. He has mentored hundreds of Coronado children by offering jobs at his two restaurants and was one of the first companies to bring CHS special education program students to work, giving them self-confidence.

While he enjoyed his daily routine at both restaurants, the center of his heart was his immediate family, enjoying the constant laughs, sarcastic monologues and planning fun vacations where everyone was craving an invite. Unsurprisingly, Brant met his wife Carol while he was on the Chart House, and they married in 1994. Both were blessed with the news and then the birth of their beloved daughter Emily in 1999. Brant’s business empire has become a family affair, with his wife Carol handling the finances and behind-the-scenes duties, Kathy Bryne, Carol’s sister, running Island Pasta’s day-to-day, and his daughter Emily, who grew up in the restaurant business, starting as a baby strapped to Brant’s chest in the early years to becoming a waitress and hostess, graduated to creatively try to help Brant as he organized his social media brand to attract customers to Coronado Happenings’ two restaurants.

Brant always considered himself lucky to have grown up in Coronado in the 1960s and 1970s – the sleepy island was idyllic, with a Norman Rockwellian vibe that instilled a sense of pride in our country and cemented the importance of united families. Brant’s love for the water began at a young age, with surfing, long days at the beach, and boating at the Coronado Yacht Club being some of his favorite pastimes. The Sarbers were (and still are today) surrounded by thousands of lifelong friendships, many of them sharing children of the same age, which meant long summers at the Del Beach Hotel and the tennis club, barbecues in the backyard, a little league, a pop buzzer, and then as Brant got older, plenty of freedom for the teens on the run. He liked to talk about going to the Free Brothers Market for 25 cent hot dogs or hiding in the dunes during physical education at the beach. During high school lunches, Brant would bring his friends over on Mondays to have leftover “Sarber tacos” from Sunday night, showing an early interest in cooking and entertaining his friends, even when it wasn’t cool.

Brant was the second son of John and Phyllis Sarber. Brant leaves on this Earth his wife Carol, his daughter Emily and Carol’s sister Kathy Byrne, his older brother Kurt, his son Michael and his younger sisters Kelly, with his daughter McKenzy and Molly, with her husband Justin and their daughters Grayson and Riley.

Brant consistently showed those around him unconditional love, unparalleled kindness, and sincere, complete care. He truly lived each day to the fullest and took advantage of everything our village has to offer, making sure to hit the beach on his golf cart to experience the surf or stop by to visit his mother. , Phyl, on her way to and from home. The Sarber family invites those who choose to remember Brant’s life to spend time with their family doing things they love, taking a walk on our beautiful beach and maybe sharing a fun story or two about his legacy. In lieu of flowers or donations, please come visit us at Costa Azul and Island Pasta often, as Brant’s restaurant empire will continue to spread love, tasty food and lots of fun to all who love Coronado and share Sarber’s sense of the importance of community.

Taste unique tacos at a new location in South Buffalo