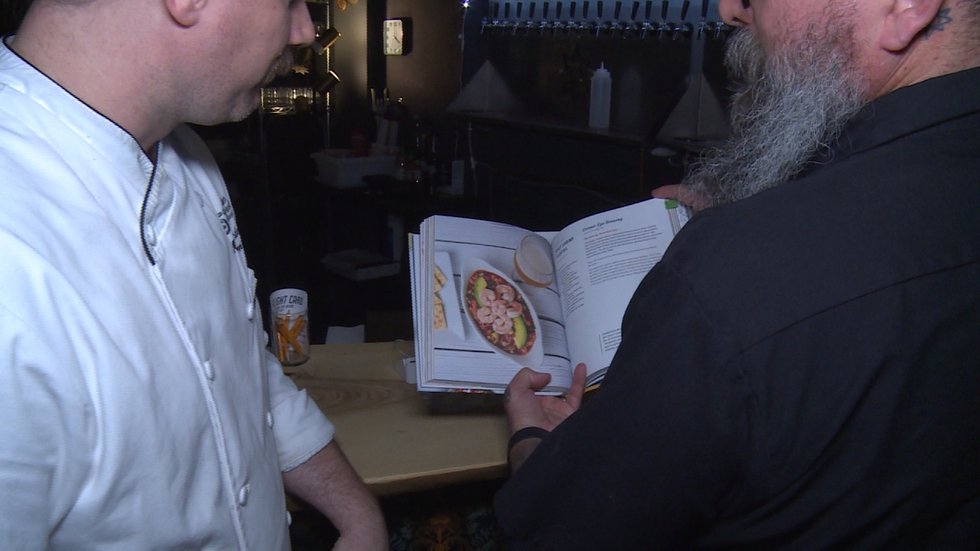 LINCOLN, Neb. (KOLN) — For two Lincoln staples on the food and drink scene, a new cookbook will mark their first publication.

The Craft Brewery Cookbook features more than 70 beer recipes and pairings from chefs and brewers across the United States, following a growing trend of pairing foods with drinks other than wine.

“So each recipe in the book is not necessarily associated with a specific beer, but with a style of beer,” said Sam Riggins of Cosmic Eye Brewing in Lincoln.

Riggins said once he heard about the author’s project, he reached out to local chef Mike Vandenberg, who works right next to him, to create the dish. A spicy shrimp cocktail.

“The presentation is huge, especially when people are flipping through a cookbook and they see the pictures and what grabs their attention is probably what’s going to stand out and something they’re most interested in,” Vandenberg said. “With this dish in particular, the colors really speak for themselves, its very red base and we usually top it with very white prawns and very green avocados.”

The cookbook’s author, John Holl, cooked and prepared each dish himself and also paired the entire book with beers. Riggins said he toyed with a few different brewing ideas.

“When we originally sent this recipe, the inspiration for this recipe was our Dead Man’s Run beer, which we make Bloody Mary beers with. Some sort of inspiration for our Bloody Mary blend comes from Mexican-style shrimp cocktails” “John happened to have a lot of our beers that he was sampling and commenting on at the time and when he made the dish at his house he liked the way it paired with our beers,” Riggins said. acids instead, so that’s what’s presented in the book.”

“Very flattering and very humbled to be a part of this and it feels good to be in a book,” Vandenberg said.

The book will be released on Tuesday, it will be available at many national retailers like Target and Amazon. To celebrate, the duo is hosting a beer and food pairing event this Saturday. Customers who purchase a ticket will be able to taste the dish and the beer suggested to accompany it.