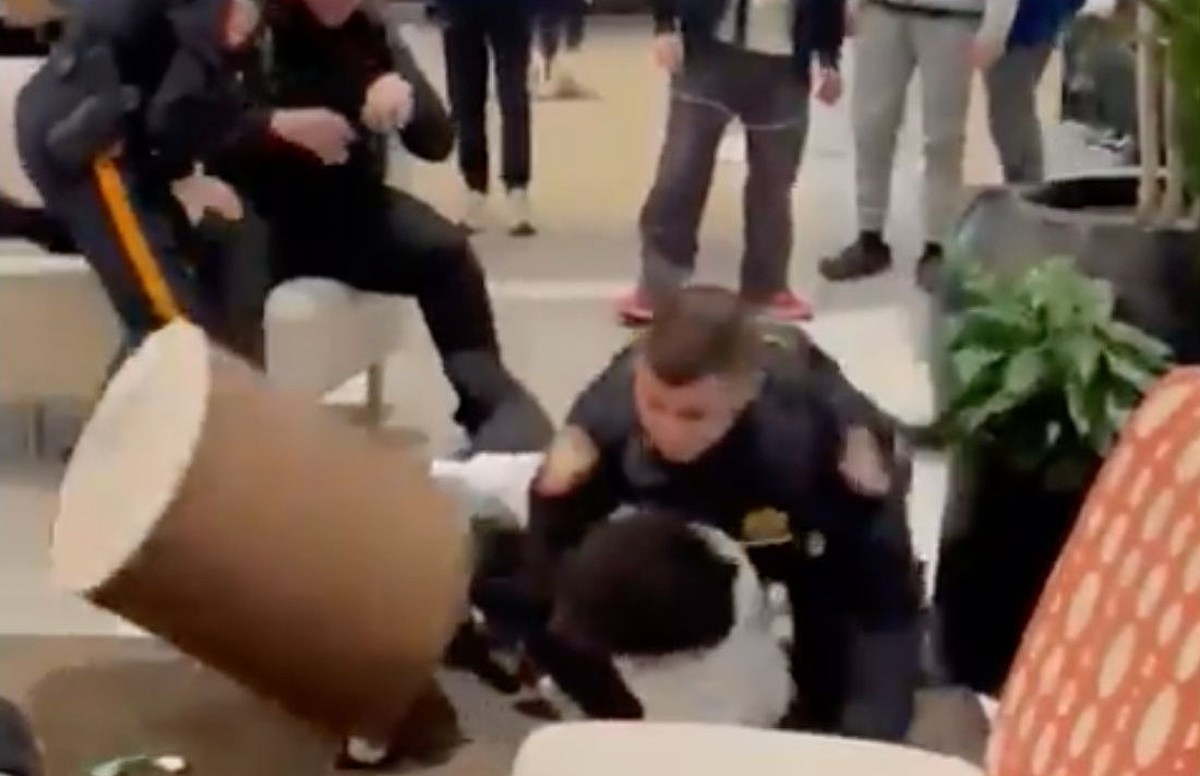 BRIDGEWATER – The Bridgewater Commons shopping center is under fire for asking the family of a black teenager to pay damages from an arrest that has raised questions about whether police treated the black teenager harsher than a lighter-skinned teenager involved in a fight.

“This offensive and unacceptable demand for payment continues to illustrate the disparate treatment of white families and black families in America,” said civil rights attorney Ben Crump, who represents the black teenager’s family, said in a written statement.

“The only people who should be asked to pay for the damaged table are those who turned themselves in to biased policing and damaged it – the Bridgewater Police Department.”

Mall security told the eighth-grader’s mother she would have to pay for a table the officer knocked over while attacking her son, Crump said.

Local officials remained silent about a week into the review of officers’ use of force during the arrest. On Saturday, a civil rights group staged a protest outside the police department. Groups such as the NAACP, local chapters of the Black Lives Matter movement and the New Jersey chapter of the Council on American-Islamic Relations have called for the officers to be removed from the force.

The police tackled the black teenager to the ground and put one knee behind his back to handcuff him. Meanwhile, an officer guided the lighter-skinned teenager to a sofa and left him unrestrained.

“We are aware of the incident and the two youths involved have been immediately banned from our property for the next three years,” a spokesperson for the mall said in a statement first issued Wednesday.

“As this is a police matter and is currently under investigation, please direct further inquiries to the Bridgewater Township Police Department.”

The mall declined to comment further when asked if a security guard told Z’Kye Husain’s mother that he would be held financially responsible for the overturned furniture.

The other teenager involved, seen on unattended video as the second officer helps the first handcuff Husain, has been identified as Umar Joseph Franco, of Hispanic and Middle Eastern descent, according to NJ.com.

“I know what the cops did was wrong so there should be consequences,” Franco previously told MyCentralJersey.com. “I didn’t see him resist at all.”

Since the video went viral, the NAACP has called for the officers to be “removed” from the Bridgewater Police Department pending the Somerset County District Attorney’s Office’s ongoing investigation into the use of force.

Now, the New Jersey chapter of the Council on American-Islamic Relations (CAIR-NJ) has joined the call for the two officers to be removed from their positions as part of the review.

“The incident is outrageous. The disparate treatment the two teenagers received from police officers highlights the blatant racism that continues to influence the judgment of so many law enforcement personnel,” the CAIR-NJ executive director Selaedin Maksut in a written statement.

“There must be zero tolerance for such inappropriate behavior.”

Erin Vogt is a reporter and anchor for New Jersey 101.5. You can reach her at [email protected]

Sauce or gravy? These restaurants make the best red in central Jersey

Where Everyone Knows Your Name: NJ’s Friendliest Bars

Update: Arrests in New Jersey during US Capitol riot on January 6

A year later, more than 20 people from New Jersey were charged with participating in the January 6 insurrection at the United States Capitol.

Get Easy Tribal Loans for Bad Credit at Heart