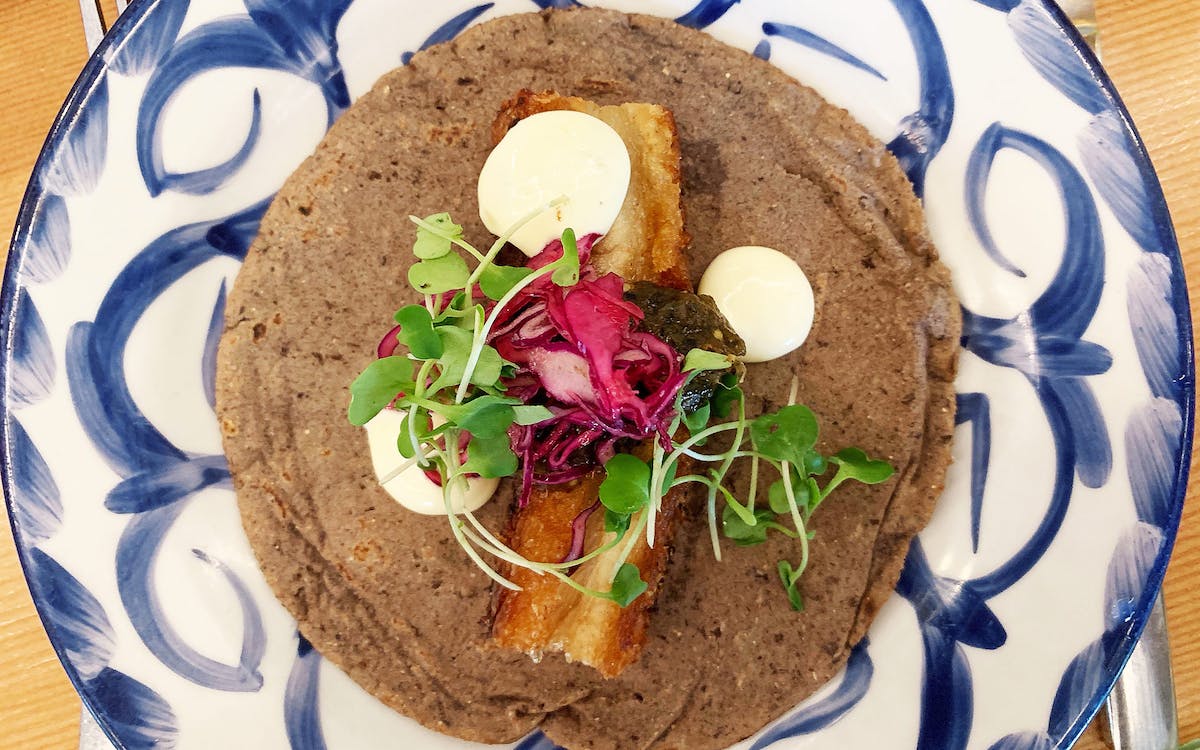 The crudely hewn white and brown brick freestanding building looks as comfortable along Dallas’s Lovers Lane, on the edge of the affluent Bluffview enclave, as it would in the Tony neighborhood of a Mexican town. The restaurant, José, a modern Mexican restaurant locally called José on Lovers, is rustic but chic. The interior is elegantly appointed with leather seats, semi-circular yellow cabins, dark wood, and ceramic tile walls. They are painted in swift, rough lines with representative Mexican street and restaurant scenes. The mural extends to the outdoor seating area at the front of the restaurant. In the center of this patio stands a fountain in the heart of agave. Much of the decor comes from the Guadalajara workshop of master ceramist José Noé Suro. (The restaurant’s name honors the artist.) It’s a peaceful space with an extraordinary list of agave spirits and a staff with a penchant for anticipating diners’ needs. Heading the kitchen is Executive Chef Anastacia Quiñones-Pittman (known as AQ), a native of Texas and a leading figure in contemporary Mexican cuisine in the state.

It’s a job she fought for during her career as a professional cook. Ten years ago, she was one of the first high-end chefs in Dallas to nixtamize corn in-house, at the short-lived Alma restaurant on Henderson Avenue. Local diners weren’t ready and the restaurant closed after eight months. More recently, when she helped open Cedars Social as an executive chef, diners seemed ready for modern Mexican. But Quiñones-Pittman left this restaurant after a disagreement with his partners over the direction of the menu. At José’s, she found a welcoming space where her talent and her vision are fully realized.

Quiñones-Pittman claims its place at the top thanks in part to its chef’s specialty, Tacos de Tacha. (Tacha is her childhood nickname.) The dish changes every few days and is often inspired by available ingredients or the chef’s introspection. The thought led to the creation of a recent Taco de Tacha, a slice of sweet lobster tail draped in aromatic, herbaceous mole verde. The thick mole, aged for nearly a thousand days, with a surprising but not unpleasant hint of spice, is sprinkled with nuggets (pumpkin seeds) and sesame seeds. The taco is presented on a tortilla made from old pink bolita belatove corn. Its rough texture and color, which changes from mottled pink to uniform brown, evoke a wet sandy beach. But it’s more than a beach dream on a plate.

The chef tells me the taco formed as she thought about how the mole continues to be confined to family recipes and inherited history. “It’s always your grandmother’s mole or your mother’s mole. It doesn’t have to be, ”she says. Chicken in chocolate brown poblano mole does not need to be the default. The lobster taco is a repudiation of the one in honor of his daughter. “A big part of my cooking is showing it’s okay to honor your mom while showing your daughters it’s okay to be different.” Tradition can be folded without being broken and swept aside.

Examples of the refreshing versatility of Quiñones-Pittman’s food can be found in other Tacos de Tacha, among which the tempura-fried maitake mushrooms topped with burrata and marinated peppers on a red bell tortilla; seared pork belly with blackberry mole and peaches on a blue corn tortilla; and fried squash flowers stuffed with quesillo with arugula on a chili de árbol tortilla. Two of my favorite early Tacha Tacos are the taco de flautitas, chopped fried flautas nestled in a blue corn tortilla, and the s’mores taco. The latter begins with an Abuelita brand chocolate infused corn tortilla topped with a homemade caramelized Mexican vanilla marshmallow. Most corn tortillas are infused with other elements, such as bell pepper, chocolate, or hot peppers.

Tacos aren’t the only dishes in Quiñones-Pittman’s culinary arsenal. Another of his specialties is aguachiles. The seafood dish in a chili infused liquid is essentially a raw citrus and fruit seafood playground. The aguachiles turn at the discretion of the chef, just like the ceviches. Recently, however, the offering was coconut ceviche, Texas rockfish, avocado cubes and mango mixed with pepitas, bantam discs of serrano peppers, cilantro and lime juice. served in an open coconut surrounded by tostadas.

The carnitas de olla, a delicate and sweet preparation of pork immersed in a tomatillo salsa, are also very popular. Then there are the tetelas, thick masa folded into a triangle and stuffed with a fillet of quesillo and mushrooms. The dish is a celebration of the rainy season, when the bounty of Mexican mushrooms is used in a myriad of preparations, including José’s beautiful tetelas. They are plated next to an aged taupe pool with an island of cream in the center. When combined, it means chewy masa bites; salty and milky cheese; mushrooms evoking the forest; and alternating the sweet, spicy and tangy flavors of the mixed sauces.

In a way, Quiñones-Pittman was supposed to find a home with José, a home that would give him carte blanche to share his vision of Mexican cuisine. Owner Brady Wood offered her the job before the restaurant opened on Cinco de Mayo in 2017. She immediately declined the offer because she didn’t think she was the right fit for the job. Wood continued to approach him to join the team, even though it was as a consultant. Quiñones-Pittman repeatedly refused, until his departure was dramatically played out at Cedars Social. She decided to take a break from professional kitchens to focus on taco pop-ups. When Wood approached her again in late 2018, Quiñones-Pittman agreed, as long as she had carte blanche. “It turned out to be magical,” says Wood. “She is one of the most special people I have ever met.”

The result is magical, but the beginning was difficult. One day, when Quiñones-Pittman had been at work for less than two weeks, most of the kitchen staff came out in protest. “They didn’t like taking a woman’s period,” she says. Her husband, Chef Daniel Pittman, has left his busy restaurant to do the dishes at José’s. This disastrous service, after which Quiñones-Pittman had to hire a roster of new kitchen workers, resulted in staff committed to the community at all levels. La tortillera declares that she is happy because she loves what she does. Quiñones-Pittman encourages its cooks and chefs to experiment in the kitchen, learn new skills and work in different cooking positions. They might even have the opportunity to create a Taco de Tacha using Masienda’s homemade nixtamized corn masa.

Quiñones-Pittman, General Manager Victor Enrique Rojas and Beverage Manager Carlos Marquez make most of the dining decisions as a trio. During the early stages of the COVID-19 pandemic, they served hot meals to frontline medical workers, set up curbside operations, and adjusted to new variables together. The pandemic has also given the team the opportunity to streamline operations, customer experience and staffing. Since March 2020, the trio have created a team bond by selecting staff members who they believe had the same approach to hospitality and Mexican cuisine. These staff are what Rojas calls “a superior group to work with every day”. I see the high standards every time I dine at José’s place. The bar or the patio are the best places to discover the excellence of the restaurant. Every server is ready to help, the bartenders are as knowledgeable as the waiters and kitchen staff, the agave heart fountain is soothing, and the tacos are always a happy surprise.

Some of the best home improvement loans of 2021