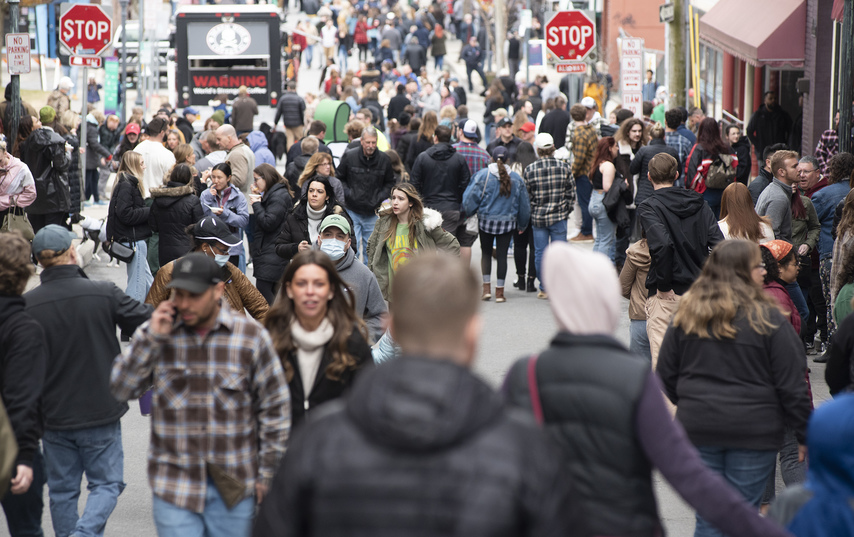 SARATOGA SPRINGS — Lines of people waiting to get their hands on a 4-ounce sample of various types of chowder from more than 50 vendors sprawled across many sidewalks and streets in Saratoga Springs Saturday afternoon.

The crowds were so big at Chowderfest that nearly an hour after it started, the parking lot near downtown Saratoga Springs was closed — signs said the garage was full, even though electronic signs said otherwise. By 2 p.m., the signs had moved and people had started pouring into the garage again.

Other cars lined the side streets. Some people have been seen doing multiple loops around lots in hopes of a spot becoming free.

The parking lot looked like it would during Saratoga racetrack season, just in another part of town, said Todd Shimkus, president of the Saratoga Chamber of Commerce.

“That’s awesome,” he said, watching the crowd march from place to place, chowder in hand.

The event began with a Chowder tour from March 19 and continued through Friday, before the festival on Saturday. The tour is something Discover Saratoga organizers began last year due to COVID-19 concerns.

At 17 Maple Ave., music blared and dozens of people could be seen dancing in a line as they waited to receive Mexican chowder prepared by La Capital Tacos chef and owner Yair De La Rosa.

“It’s been nonstop,” manager Leanne Otero said, taking cash from another customer. ” We are used. This is how we thrive.

De La Rosa hails from Mexico City, which inspired the chowder recipe. However, while he is the chef, he said his employees helped come up with the recipe, not finishing the idea until Friday. Then they spent hours making gallons of chowder.

De La Rosa couldn’t say exactly how much chowder they made.

“I used the biggest pot I could find,” he said, pointing to the huge pot.

And even though Chowderfest is a competition, De La Rosa said he doesn’t really care about winning.

“I just do it so people can enjoy it,” he said.

One of the people who loved her chowder was Dawn Micare from Saratoga Springs. She and her two daughters, Ava and Sophia, went to the event together.

“I would order this,” said Dawn Micare, as she and her daughters continued to place spoonfuls of chowder in their mouths.

Micare said she tries to take her daughters to the festival every year and is happy that it is back in full force.

“It’s nice to be outside again,” she said.

People were side by side in parts of Caroline Street, where several businesses opened their doors to customers and had chowder ready to serve people right on the sidewalk.

Monica and Jim Hardy from Averill Park had arrived after 1 p.m., finding a parking space by chance. It was the couple’s first time at the event, they said.

“We’ll probably have a good five or six,” Jim Hardy said of the chowder options.

Besides being able to eat chowder, the couple were happy to see so many people enjoying themselves again.

“This is what the world needs,” said Monica Hardy.

The two, who were there with a few other friends and their children, had stopped at the Henry Street Taproom before heading to Cantina. Next stop was Hattie’s restaurant, which they said served fried chicken chowder.

But until now, Cantina’s chowder has been their top choice.

Not far from Cantina, employees of The Wine Bar were cleaning up, with a sign saying they had sold out – only an hour and a half into the event.

She had made 25 gallons of New England clam chowder using fresh clams and scallops, she said. As soon as the event started at 11 a.m., she had a line, she said.

She too agreed with what many festival goers had to say – it was nice to have the festival in full swing. Evans said people were back not only to eat chowder, but also to shop at local stores.

“That’s what Chowderfest is supposed to do,” she said.

More from The Daily Gazette: