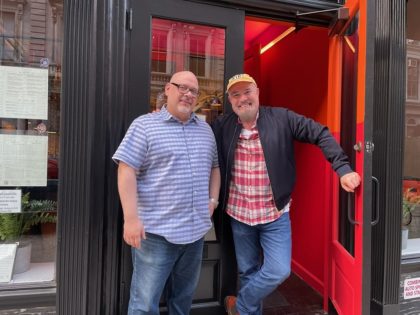 Roberto Santibañez would sit at the Blaue Gans bar and say to his partner, “Wouldn’t this place be a great foundedOf course, that was solid four years ago, before Savida, before the pandemic and all that came with it. Fast forward to last year, after dinner at the Odeon, he and his partner were walking around the neighborhood again (they live on Pine Street) when they saw the “for rent” signs on the windows.

“I called the next day, the owner met me that afternoon, then he came to eat at Fonda,” Santibañez said. They signed the lease soon after. “It was good. I only feel good vibes here. Hope the neighborhood feels the same. It opened on Duane on April 22.

Like so many Mexican chefs, Santibañez began cooking with the women of his family in Mexico City – “a good family of gluttons, really food people” – who would start planning the next meal around the last one’s table. He grew up “playing” in the kitchen with his grandmother, and as a teenager there was no doubt he would become a chef. At 18, he was living in Paris with his mother and stepfather (anthropologists who created museums), frequenting Le Cordon Bleu.

The culinary institution was, of course, an excellent training ground, but it also cemented his love of Mexican cuisine. “I felt in my heart that our food was better – more exciting, with more punch,” he said. “French cuisine is all about timing, process and balance, and learning which made me fall in love with my country’s cuisine in a different way.”

Santibañez returned to Mexico City and opened his first restaurant, La Circunstancia, in 1990, just as the downtown neighborhoods were coming to life. But in 1996, he sold the restaurant and came to New York for a job offer with the founder of Rosa Mexicano, who, upon returning to Mexico, would eat at La Circunstancia.

“Back then, there weren’t that many of us male chefs doing innovations and playing around with Mexican cuisine,” he said. She and her partners wanted to expand the business here – and of course they eventually did, opening a branch on Murray Street for a time – but when the founder fell ill Santibañez decamped to Austin where he was the head of the 47-year-old Mexican institution Fonda San Miguel. He was drawn to the city in 2002 to develop Rosa Mexicano’s culinary program.

Obviously, it wasn’t that difficult to start your own restaurant here. Santibañez opened the first Fonda in Park Slope in 2009, the East Village in 2011 and Chelsea in 2014, but lost the East Village to the pandemic. He has two restaurants in DC and a third is on the way. The Tribeca location took advantage of the gorgeous high vaulted ceiling (and I still love those window tables). There’s more art to come for the walls, but in the meantime the space is festive, bright and modern – the architect has had the walls coated but with a silver hue embedded in the plaster – beautiful .

The food, by the way, is outstanding. He does black mole enchiladas, as well as modern twists on crab coquette, ceviche, and my favorite, zarape de pato — braised duck sandwiched between tortillas with tangy habanero salsa. My friends asked for extra sriracha peppers to increase the heat, but I was fine without any extras. The mezcal list is huge and our table loved the cocktails. Would go back soon for the salmon – seared on mashed sweet potatoes with ancho pineapple sauce.

Santibañez still spends much of his time in the kitchen, developing new recipes (he showed me pictures on his phone of his latest herbed Caesar salad) and managing his staff, many of whom have been with him since the start. (Edward’s Youkilis came in for a meal and said it looked like it had been open for years – a huge compliment.) But he thinks he might try to slow down a bit.

“I’m in the car all the time, but lately I’ve been like, ‘Do I want to be even busier?'” Santibañez said. (He says he’s introverted, but you’d never know – no one could be warmer or more welcoming. That’s him on the right with general manager John Rodriguez.) He’d like to spend a little more time at home on Fire Island, where he planted three cherry blossom trees last year. “I was so proud.”