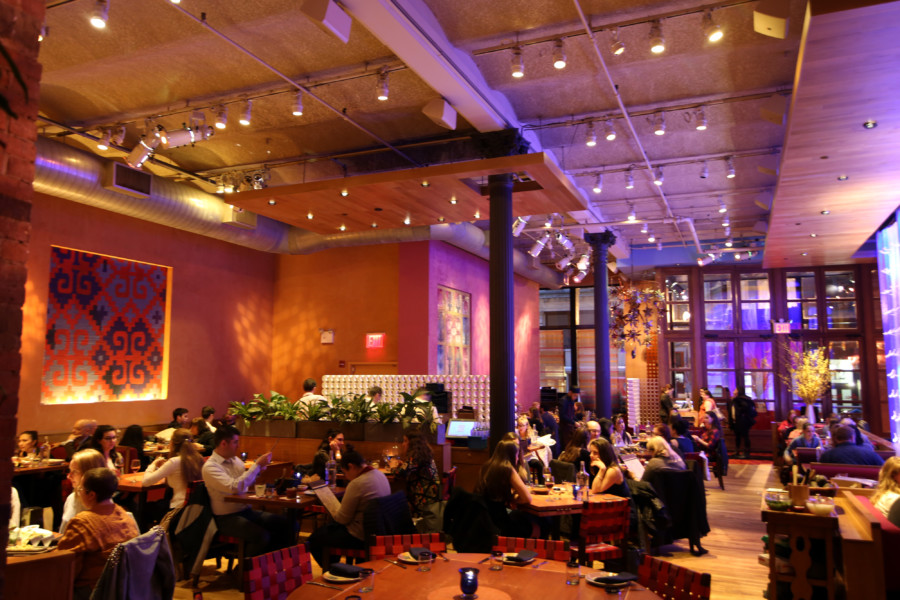 For my birthday I wanted some Mexican food so we headed over to Rosa Mexicano. Since I was in New Jersey, we went to the one in Riverside Square Mall. To start, we ordered the Blood Red Margarita ($12.50), Cucumber-Mint Refresco ($6), Blood Orange Spritzer ($6), a large Guacamole ($28) and two Pulpo, grilled marinated octopus with habanero and citrus, red onion, avocado and tomato ($12). The margarita and guacamole were excellent, but a friend of mine hates ice cream, so we asked for her to drink without ice cream. It came in a small glass filled with ice and had no seltzer. When it was returned it came back in the same little glass, again without seltzer water and half full. Basically, two sips and it would be gone except she couldn’t drink it because it was horrible. We also asked how big the Pulpo appetizer was and was told it was for one, except it was enough for two or three. So needless to say we had plenty of Pulpo, as I don’t eat seafood and there were three of us. Good deal for the price though.

Then we had two orders of cheese enchiladas. This item is not on the menu and we were charged for the chicken trio which is $23 where most entrees are $19. I was told they didn’t have normal red sauce enchiladas so I got the mole. My friends had one with the sauce on the side. It was all wrong. The first order was not cheese, but chicken. Second, the enchiladas had no cheese on top and were so unappetizing. Third, the mole sauce was God forsaken, as were the side sauces. To make matters worse, the cheese in my enchiladas was lukewarm. These dishes did not come with rice and beans, so we ordered Elotes o Esquites, Mexican street corn on the cob or on the cob ($6) came off the cob even though I ordered it on the cob and the Arroz y Frijoles, Achiote Rice and Epazote-Jalapeño Refried Black Beans ($6) which again was awful and not what it claimed to be.

Our server was rarely there and not really helpful which didn’t help.

At this point we were fed up but manager Paul Abrams came over and took away the Chicken Enchiladas, Arroz y Frijoles and the disgusting Blood Orange Spritzer. He brought us a Tres Leches ($10), a classic sponge cake dipped in three different milks, supposedly topped with toasted coconut flakes and fresh berries. Again not so great and no coconut and churros ($10), which are hot Mexican donuts, sprinkled with sugar and cinnamon and served with dark chocolate and raspberry guajillo sauces, which were wonderful. He also brought us really fresh coffee.

What he brought more than the desserts was caring and an understanding that things had gone wrong. He was caring, charming and made a bad situation bearable.

We paid over $100 for this mostly inedible meal, tipped well even though it didn’t deserve it, and left in pretty good spirits thanks to Paul.

As we left, we watched Paul calm down yet another table whose order had been messed up. He also made them smile at the end.

I’m writing this because Rosa Mexicano needs to get her act together food-wise because the last time I ate at Lincoln Center the food was mediocre and there are three locations in New York.

What Rosa Mexicano managed was to hire Paul Abrams, because we’ll be back for Margarita’s, guacamole and say hello to Paul.

Are installment loans and payday loans the same thing? –