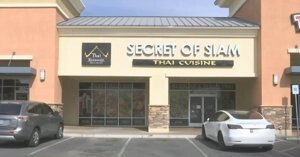 A diner who ordered takeout from Centennial Hills Thai restaurant said those symptoms have not stopped.

“It’s been like a real nightmare,” said Gera Wade, who ordered from Secret of Siam on Feb. 11. Wade said he has been in and out of the hospital several times since he last ate there. He described his persistent symptoms as “a tingling, burning sensation” and a rapid heartbeat.

On Friday, the Southern Nevada Health District announced that more than 30 people had reported symptoms such as increased heart rate, blurred vision and hallucinations, allegedly after eating Secret of Siam food.

According to SNHD, Secret of Siam received an “A” in its last health inspection on February 10, a day before Wade and others at the restaurant began reporting symptoms.

Wade said he took his remains to the Metropolitan Police Department in Las Vegas for testing.

“The police came back with the results. They found high levels of THC in the evidence I gave them, the food,” he claimed.

On Tuesday, LVMPD said it was still testing leftovers to determine if anything had been put in the food and could not confirm any test results.

Note: This content is subject to a strict local market embargo. If you share the same market as the contributor of this article, you cannot use it on any platform.