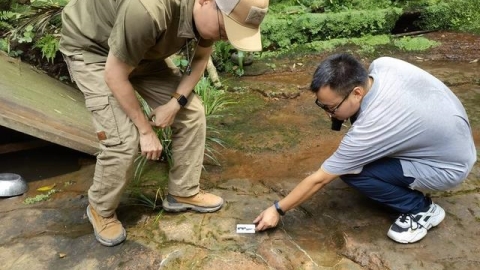 Paleontologists at the restaurant on Saturday to examine alleged dinosaur footprints.

Paleontologists have confirmed that the marks noticed by a diner in the garden of a restaurant in southwest China’s Sichuan province are dinosaur footprints, thecover.cn reported on Sunday.

The footprints, believed to date from the early Cretaceous, are those of two brontosaurs, a family of gigantic herbivorous quadrupedal dinosaurs.

They are said to be the first dinosaur footprints in the world to be discovered in a restaurant, we learned.

The site was discovered thanks to a man named Ou Hongtao, who dined at “Yuanyi Senlin” restaurant on July 10. The restaurant is located in Leshan City, famous for its Leshan Giant Buddha, the largest and tallest stone Buddha statue in the world.

Ou, who has a keen interest in paleontology for his work with stone materials, said he inadvertently spotted curious bumps on the stone floor of the restaurant’s garden that he thought were dinosaur footprints.

That evening, Ou contacted Xing Lida, an associate professor at China University of Geosciences, a famous paleontologist and popular science writer, on the Internet about his discovery.

Along with a group of fellow paleontologists, Xing arrived at the restaurant on Saturday to examine the stone marks. Scientists came to their conclusion that the marks were dinosaur footprints after measurement, drone photography and 3D scanning of the footprints.

In total, a dozen two-line Brontosaurus footprints were found. They are thought to belong to two dinosaurs in the family that were around eight meters long as they walked along a river in ancient Leshan around 100 million years ago.

This is the first time that fossils with dinosaur footprints have been discovered in urban areas of Leshan city and it raises the possibility of further finds, Xing said.

Experts advised the restaurant to carefully preserve the site.