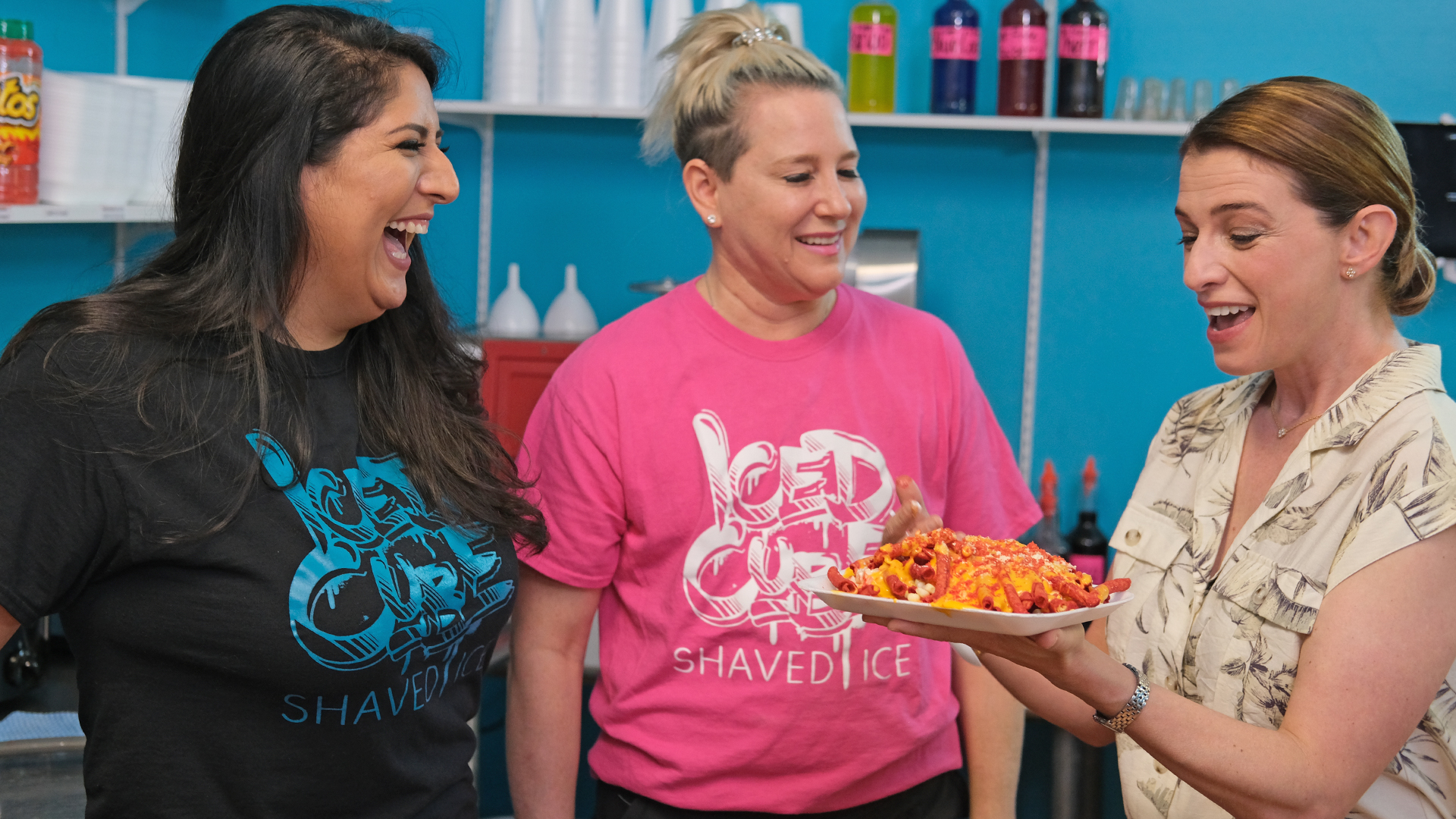 In Part 2 of the series, From Dos Laredos to Mars, Pati travels from Laredo and Nuevo Laredo to Brownsville, Texas. She learns how close family ties are an underlying theme that connects everything in Laredos and throughout La Frontera. She takes a close look at the region’s major industries – trucking, trading, and ranching, and gets a taste of the American Dream while spending time with the owners of Taco Palenque, a rapidly growing family regional favorite. – laid back empire throughout South Texas.

Pati spends the afternoon with Sister Norma Pimentel to understand the motivating force behind migration and attends a Tecos baseball game – the only binational baseball team in the world. She travels to the Gulf of Mexico to see how the border is the terrain of another new frontier – as the launch pad for the Space X program to explore Mars. Tasting the food and meeting people who live and work here, she sees how the border is a place of opportunity and creativity, including the next ticket to Mars. 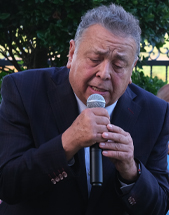 Juan Francisco “Don Pancho” Ochoa, was born in Sinaloa, Mexico. He founded El Pollo Loco in Mexico and decided to bring his restaurants to the United States. He first started in California but moved to Laredo after feeling a strong connection to his country. He opened his first Taco PalenqueÂ® in 1987 and today there are nearly 30 branches across Texas. He runs his family business with his wife and kids and often finds himself in the kitchen of any location at any given time! 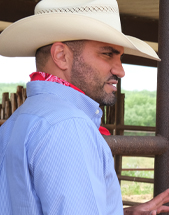 Judge Tito Tijerina was born and raised in Laredo, TX. He is the product of a family of public servants and learned early on the importance of hard work, commitment, dedication, respect and community service. In 1993, he was selected by the Milwaukee Brewers in the eighth round of the amateur draft and played four years of professional baseball in the Milwaukee organization before retiring from baseball and returning to Laredo. Upon returning to Laredo, Judge Tijerina continued his education at Texas A&M International University and in 2002 graduated in fitness and sports with a minor in criminal justice. Judge Tijerina is a longtime breeder in Webb County and has professional interests in oil and gas, rodeo inventory management, financial investing, and transportation.

Lucie Montemayor moved to Laredo with his family at the age of 9 from Monterrey and loves calling Laredo home. She is now the Director of Operations at the CoolHouse Distribution Center and has worked for several years as a customs broker. She married into a multigenerational Laredo family and knows the traditions of the city, its relationship with Nuevo Laredo and its large-scale importance to commerce across the Americas.

Luis Aril Anzures, is the owner of Tacos Con Ganas at the World Trade Bridge. His family-fun taco truck at the World Trade Bridge is parked right in the middle of two-lane highways heading north and south. While some trucks go 70 miles an hour, others stop for breakfast and lunch – a quick break from the endless freeway in sight and Luis’s stuff is a staple for many drivers who congregate here and enjoy their tacos, caldo, gorditas, and more. 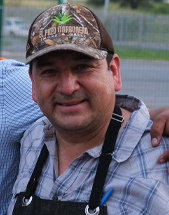 Carlos delgado, has worked in maquiladoras for many years and now helps them operate more efficiently and meet environmental standards. But on top of that, he has a ton of love and passion for his side business, El Pozo Carbonero. He has taken a hobby that is a regional favorite, carne asadas, and turned it into a side activity and competitive. On top of that, Carlos still enjoys grilling with his friends, colleagues and family where it all began – the parking lot of a maquladora. 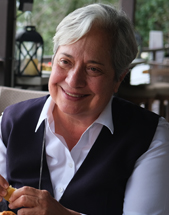 Sister Norma Pimentel is part of the Catholic charities of the Rio Grande Valley. She is committed to meeting the needs of those who have recently immigrated to the United States, serving those in need with basic items, shelter and a warm embrace for those in need. She is a diplomat in the true sense of the word, often crossing the border herself several times a week to provide security and collaboration between agencies working in the United States and Mexico. 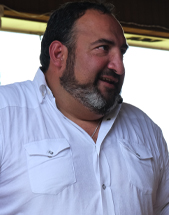 Chef Larry Delgado has been one of the driving forces in making McAllen one of the top dining destinations on the Texas border. He was born and raised in the RGV and knows it well. Coming from a family of migrant farm workers, he has a deep respect for the way food is grown and prepared in the valley. He conveys this passion to his restaurants, where his recipes embody the modern cross-border experience, using ingredients from Mexico and the United States. Larry and his wife Jessica run three successful restaurants at McAllen – House Wine & Bistro, Salome on Main and SALT. 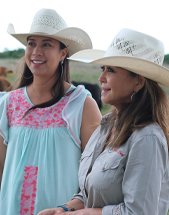 Stephanie Martinez & Alyssa Hind, are the mothers / daughters who own and operate 2F Akaushi Beef in Rancho Santa Fe. Stephanie and Alyssa run the business with their husbands and families who have ranched, raised, produced and raised commercial livestock since 1984. They have a Akaushi Wagyu genetics certified and supply local restaurants and households in the RGV. 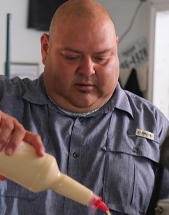 Ed margo, runs his family raspas stand, Margo’s. They have been successfully serving us delicious raspas to the community of Weslaco, Texas and beyond for many years. Originally opened by his parents, Ed and his brother carry on this family tradition by expanding their business and supplying delicious sweet syrup to other stalls, repairing machines and selling snacks like Frito Pie. 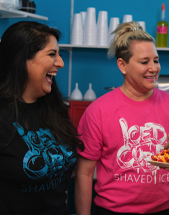 Eliza Garza & Margret Dearborn, are the current owners of Iced Cube, an expanding raspas company. Eliza and Margret love the RGV and promote its culture through the raspas, a unique treat of the Valley. 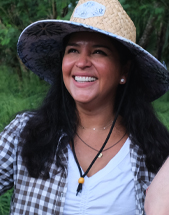 Veronique Rosenbaum is the Executive Director of the Brownsville Wellness Coalition. She is originally from Brownsville and loves her town and neighbor Matamoros. With the (BWC), a Texas nonprofit was formed to address the poor health of our community by offering programs that promote nutrition and healthy lifestyles. 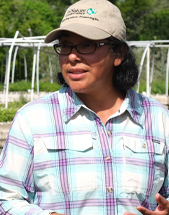 Sonia najera is the project manager at The Nature Conservancy’s southernmost reserve. She enjoys her job and strongly believes in the importance of conserving and preserving the region’s natural environment. 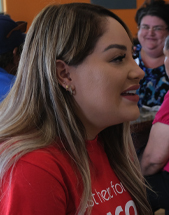 Joana hernandez runs Ultimo Taco, a Brownsville favorite with her husband. Their tacos use fresh ingredients and play on local staples. They often get creative with their menu and constantly change things up.