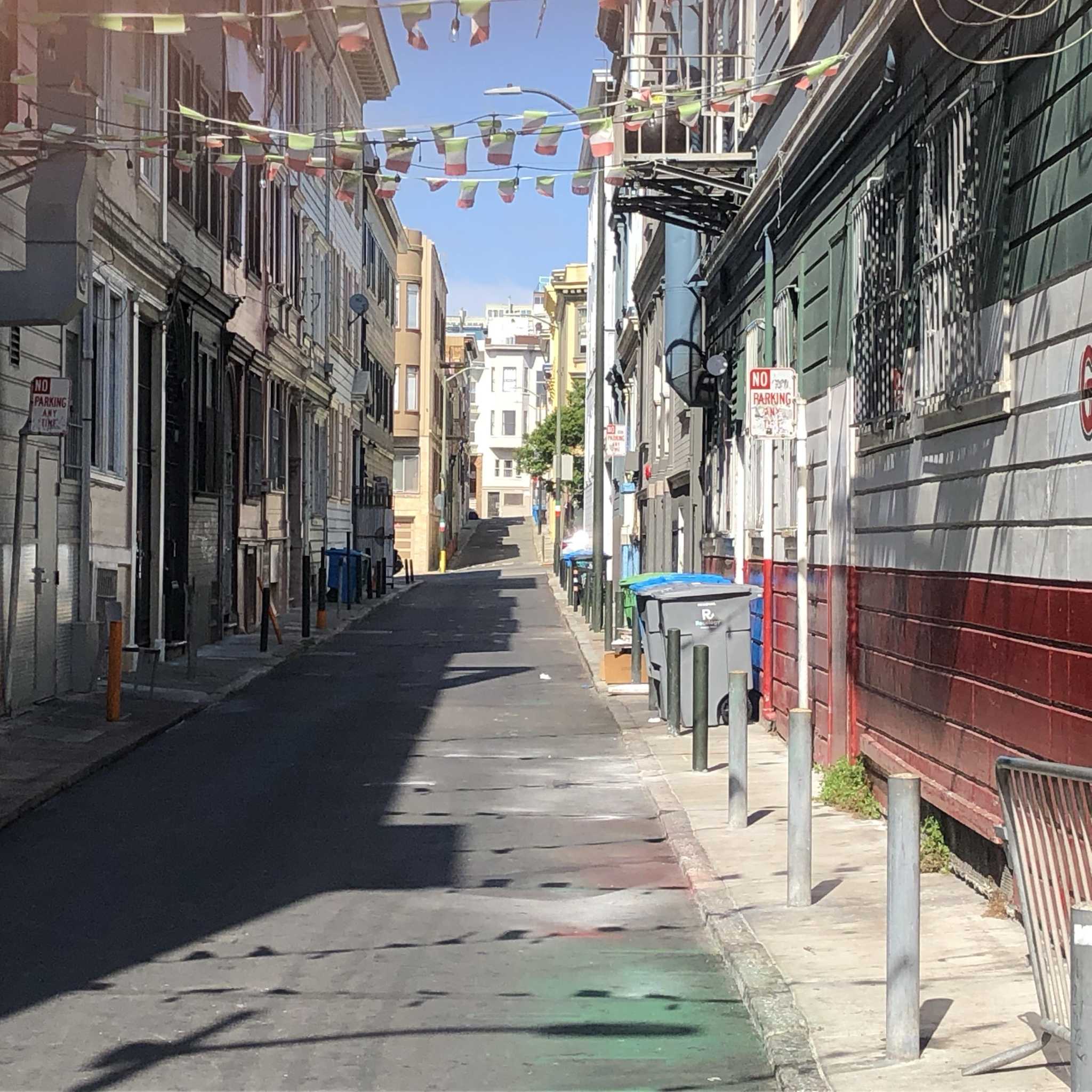 Something is in the air in San Francisco this fall. The usual glorious autumn weather has left us behind. Instead, we’ve had fog almost every day since the last few weeks of September, or about the time a scientific study came out that said the fog was clearing. And yet the fog is back, even in October.

San Francisco is a city that looks better in blue than gray, and I started wondering. Maybe the change in weather means yet another change in the city. Has old San Francisco also disappeared?

I had some errands to run last week, so I took a look. I hiked Muni – eight different Muni lines in three days. I did not go west of Twin Peaks. Too foggy, but got a good overview of much of the city.

It didn’t start well. My first ride was on 14-Mission Rapid from 30th and Mission to 16th Street to transfer to 22-Fillmore. The drive from the 24th to the 16th along Mission showed the mess there: dirt, graffiti, men slumped on the sidewalk. On 16th, they were digging into one side of the BART station plaza, displacing some of the drug dealers who frequented that corner.

Got a good seat on the 22 bus through one corner of the Mission, the edge of the Lower Haight, to Fillmore to Sacramento Street. My destination was an appointment with the eye doctor on Clay and Webster streets. familiar territory. I was born just around the corner, as were my brother, sister and one of my two daughters. I heard that OJ Simpson was born in the same hospital. They should put a plaque.

I had a few hours to kill, so I walked east on Jackson Street to Van Ness Avenue, past parks and grand old mansions. Is it fair to compare Pacific Heights to a depressed part of Mission Street? No. But they are two parts of the same city.

At Van Ness and Jackson, I took the 27-Bryant bus, down Polk Street a bit, a zigzag up the slope of Nob Hill, a dip in the Tenderloin, south of Market and the Mission. I went down to Cesar Chavez and Folsom streets and then up the hill for a delicious quick lunch at Los Yaquis, a small Mexican restaurant just off Precita Park. I had never been there before. A discovery.

The next day, set off again, this time to North Beach, via the J tram and the 30-Stockton bus. I’ve always been fascinated by a stroll down Stockton Street through Chinatown. It’s like a trip to an Asian market street. The bus goes through the Marina, along Chestnut Street, which is totally different.

I got off before this stretch at Columbus Avenue and went back up Green Street. I stopped at Gino & Carlo for a glass of wine and a photo of authentic San Francisco. It was a quiet Wednesday afternoon, plenty of room in the Italian restaurants and parklets that line Green Street, where grilled Calabrian octopus, crab chowder and branzino are on the menu. Also pizza, and a European atmosphere with flavors of San Francisco. Even a beggar.

I arrived in North Beach a few days too late, Marco Rossi, the bartender and one of the owners of Gino & Carlo, told me. “You should have been here on Sunday for the parade,” he said. It was Italian Heritage Day, and Paul Miyamoto, the sheriff, was there on horseback, the chief of police was there, and the fire chief, and thousands of people.

“Every place was packed, every bar, every restaurant, just full of people,” Rossi said. “People are all out. They were tired of staying home. They want to have a good time.

And when they did, they came to North Beach, drawn by the restaurants, the scene, the narrow lanes, the history, the old San Francisco vibe of the place.

I had a drink this Wednesday with a friend, then walked up the hill a bit, past Upper Grant Avenue with its Beat Generation memorabilia, for lunch at American Bites, which serves Italian food. It is now a white tablecloth, connected to Maykadeh, a neighboring Persian restaurant.

Both are run by Mahmoud Khossoussi, who was born in Iran and trained in the restaurant business at the Tuscan-style restaurant North Beach on Stockton Street, just off Washington Square.

American Bites and the Maykadeh sits on the site of the Old Spaghetti Factory, once a pasta factory turned restaurant in the 1950s. During the Beat era it was celebrated as a meeting place for poets and writers – “an incubator and magnet for local talent,” according to a city landmark report.

Now it has evolved again, a new adaptation of part of old San Francisco. In North Beach tradition, the gray cat that occasionally greets American Bites customers has an Italian name: Marco.