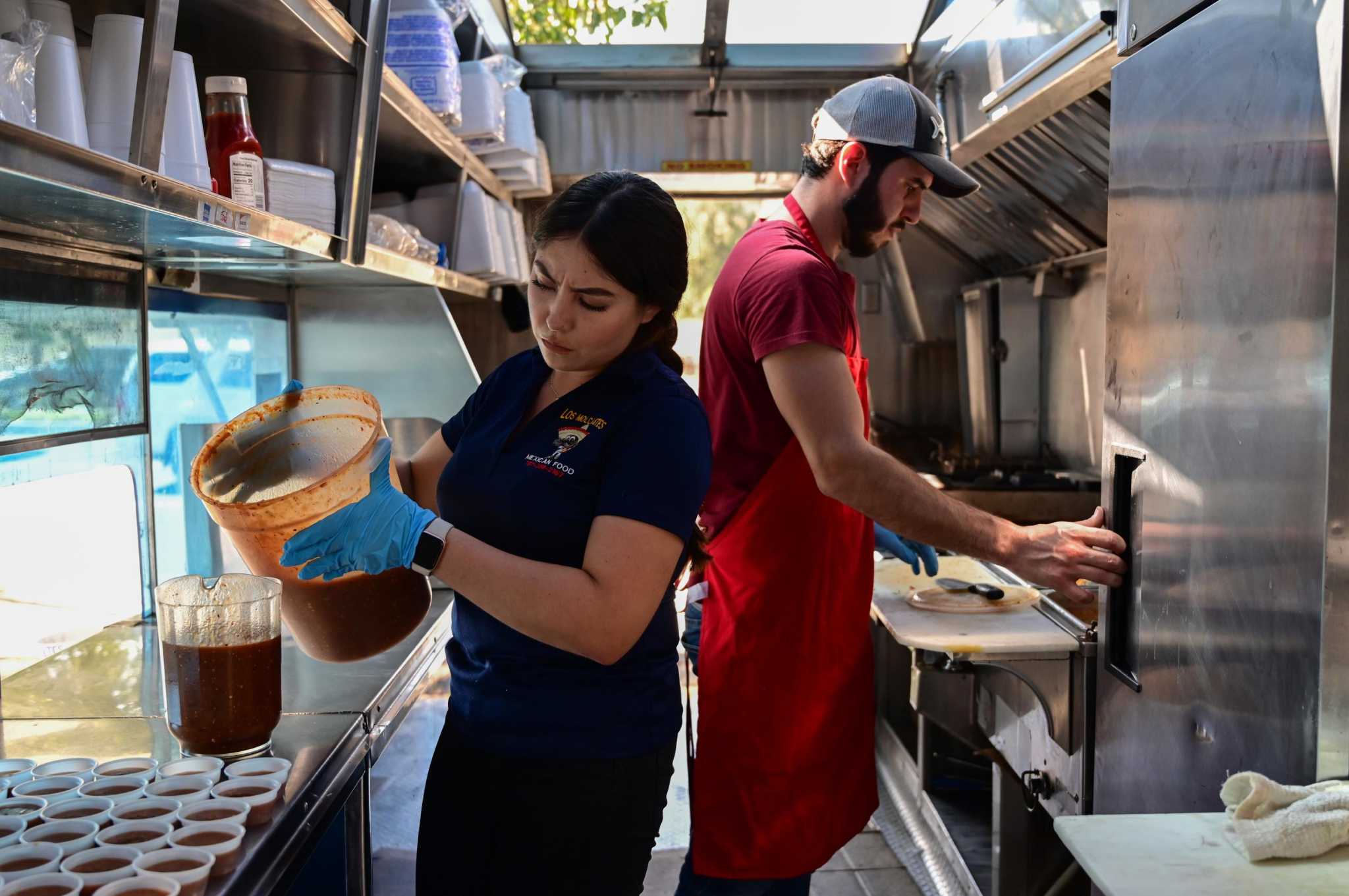 When it’s hot outside, it’s even hotter inside the food trucks.

As a heat wave hit the Bay Area on Tuesday, Victor Jimenez was working aboard Mexican food truck Los Molcajetes in Fairfield. At noon it was 101 degrees. And the fan broke.

“We had heatstroke and dizziness,” Jimenez said. “We have to hydrate constantly, and sometimes it’s so busy that you don’t have time to drink anything and you develop a headache.”

Food truck operators face a different set of challenges than restaurants, including greater exposure to high temperatures. Add roaring fryers and griddles in a cramped space and the heat intensifies.

While Señor Sisig’s fleet of Filipino-Mexican food trucks operates primarily in cool San Francisco, owner Evan Kidera is no stranger to working in the heat.

“It’s difficult,” he said. “We don’t have air conditioning inside the trucks. And most of the time, grille exhaust fans are designed for smoke, but not really for controlling temperatures inside the truck.

“Even though we have air conditioning, sometimes it doesn’t make a difference when you have the steamer, fryer and griddle on. Sometimes we prefer not to use the fryer,” Rodriguez said.

To cope with high temperatures and avoid any health complications, workers turn to cold water or sports drinks containing electrolytes. But taking time away from the kitchen is also essential.

Taco Panzon operator Martha Barajas drove her truck around Oakland for 20 years. She says managing heat in a mobile kitchen involves a bit of mind over matter.

“If you keep telling yourself ‘it’s so hot, it’s so hot,’ it doesn’t get better,” she said, adding that the Taco Panzon also comes with windows and air vents. to help regulate temperature.

Outside the truck, work suspensions to protect workers from high temperature risks are also impacting activity.

“Workers represent more than 20% of our sales. When it is over 93 degrees, the harvest is suspended and we receive many of these workers during lunch. Roofing and cement workers also don’t work in excessive heat,” Jimenez said.

At La Roca, Rodriguez said he sees fewer customers when it’s hot because people don’t want to leave their air-conditioned homes. For others, high temperatures drive up sales.

“Sometimes it’s the opposite. It’s so hot in some people’s houses and apartments that they don’t want to cook and make it hotter,” Barajas said.

The heat is expected to continue Wednesday in the Bay Area. Kidera asks food truck customers to be patient with workers inside mobile operations.

“Just be a little understanding of the situation,” he said, “because it’s no fun working in a sauna.”