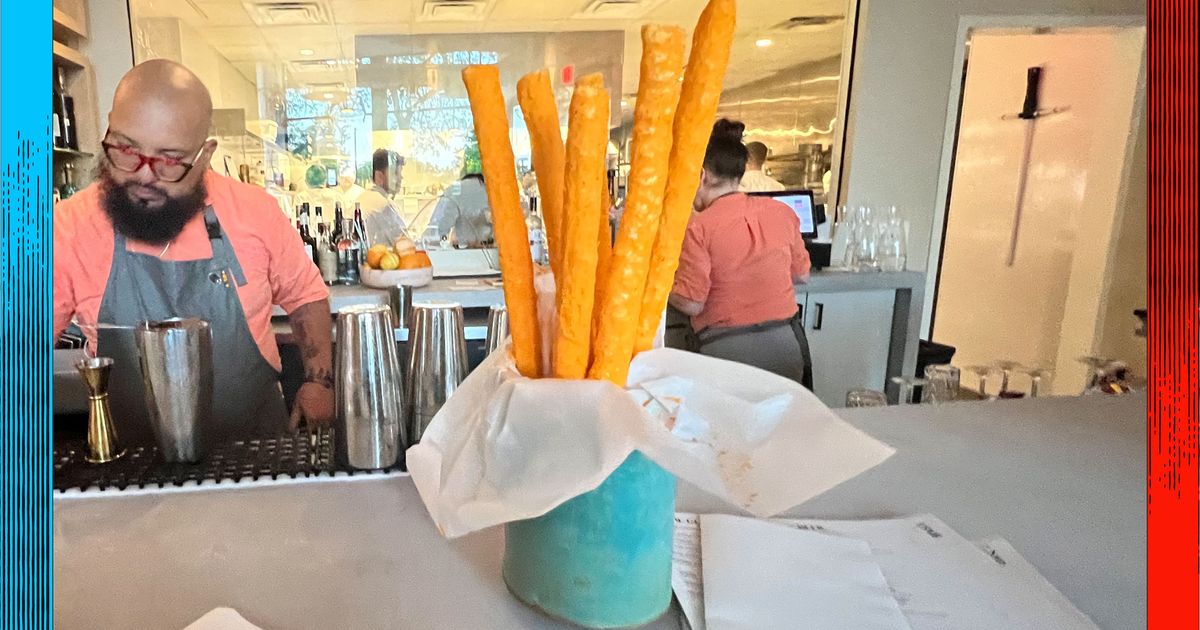 This article originally appeared in The year I ate in New York, a newsletter about eating across the city, one restaurant at a time. register here.

I was in Chicago this weekend to attend the James Beard Awards and wondered why no one had thought to call them “Da Beards”. A few changes happened while I was there: your humble restaurant in general is now a James Beard Award-winning dinner-at-largeI met Padma Lakshmi, and I can finally say I’ve been to Chicago.

I was able to eat a spectacular bouquet of two foot long hot cheetos prepared by the kitchen staff at Esmé – a very fancy restaurant with a rotating art collection that you can purchase if you wish. The adjacent bar, where I sat, has much lower stakes, though food is still served on the restaurant’s bespoke pottery. My server told me that often the plates are conceptualized in tandem with the food, and I will say that I have briefly understood the chefs who say that Chicago is overlooked as a national dining destination, because if a restaurant in New York was extruding XL cheese puffs and by placing them in locally made sky blue vases, everyone in the country would know.

Meet the Chicago Cheetos. (Next, use your towel to wipe away all the orange dust.)
Photo: Tammie Teclemariam

Since the fake Cheeto is coated in an aggressive amount of orange-flavored dust, the bartender warned me not to inhale while taking a bite or it could all go wrong. Annie Hall. I warn you to use two towels, one on your shirt and one on your lap, because this kind of thing gets everywhere.

It was a great weekend, but I was happy to get back to New York on Sunday – even though flying is always a nightmare and I had to catch a connecting flight in Columbus, Ohio. By the time I landed in La Guardia, the sun had set and I was hungry, which brings me to the real subject of this week’s newsletter: the joy of turning to a familiar restaurant at a moment’s notice. where it is needed most.

I’m pretty sure Mexico Diner has some of the best Mexican food around Prospect Park South, and I’d feel that way even if it wasn’t within walking distance of my house. I go there a lot – it was the last place I ate before leaving for Chicago – and that’s mainly because unlike most of the other decent Mexican places around me which are convenience store based and bakeries, staff at Mexico City Dinner will feed you and you sit. In fact, the restaurant recently expanded into an adjoining space, which helps cope with the crowds on Sundays, when nearby churches empty, or whenever there’s a good football game. I prefer to sit in the smaller, quirky part of the restaurant that’s connected to the kitchen, where you can look out of the neon-lined windows. My favorite time to go is lunch, especially during the week, and order the taco salad served in a bowl of fried tortillas as nature intended.

The food at Mexico Diner isn’t the stewed guisados ​​of Taqueria Ramírez, the kitchen isn’t obsessed with ancient corn varietals like at For All Things Good, and it doesn’t look like the restaurant makes tortillas fresh. in the style of Fonda Garibaldi, where the shavings are light as air.

But you know what? At the Mexico Diner, I was able to get out of a taxi with my luggage and order three copiously filled tacos of partially gelatinous carnitas seared on the flat top, finely shredded lettuce, cream and a bit of queso fresco. I got tacos, as I arrived to an empty dining room at 10pm, as the staff was simultaneously trying to shut down and complete the last hour of delivery orders. Now is not the time to order a chili relleno.

The Mexico Diner tacos (perfect) and the enchiladas suizas (also perfect but too complicated to order 45 minutes before closing). Tammie Teclemariam.

The Mexico Diner tacos (perfect) and the enchiladas suizas (also perfect but too complicated to order 45 minutes before closing). Tammie Teclemariam.

On a normal day, my dinner order is usually the enchiladas suizas – which are surprisingly hard to spot on New York menus – because it’s one of my favorite dishes and perhaps the most delicious example of fusion. Swiss-Mexican all over the world. Tamales are another standard for me. I love that Mexico Diner serves them all the time – not just on weekend mornings where you have to choose between sleeping or waking up before they sell out for the day. The tamales are always wispy and soft and are wrapped in a banana leaf, which adds a deep flavor to the masa paste.

Mexico Diner excels in two salsas in particular: a scorching, burnt orange shade and a verde version offering a more rounded profile with plenty of bite. The restaurant serves it generously in jars and with a spoon so that salsa buffs like me can sate whatever we want, although I order extra to take away as it’s better than anything I could do it myself.

I’m sure the constant number of delivery orders being placed while I ate in the empty restaurant had something to do with why it’s open so late on a Sunday evening, but I wasn’t complaining. With a cold Modelo, awesome tacos, and unlimited salsa, I knew I was home.

The year I ate in New York

By submitting your email, you agree to our Terms of Use and Privacy Notice and consent to receive email correspondence from us.