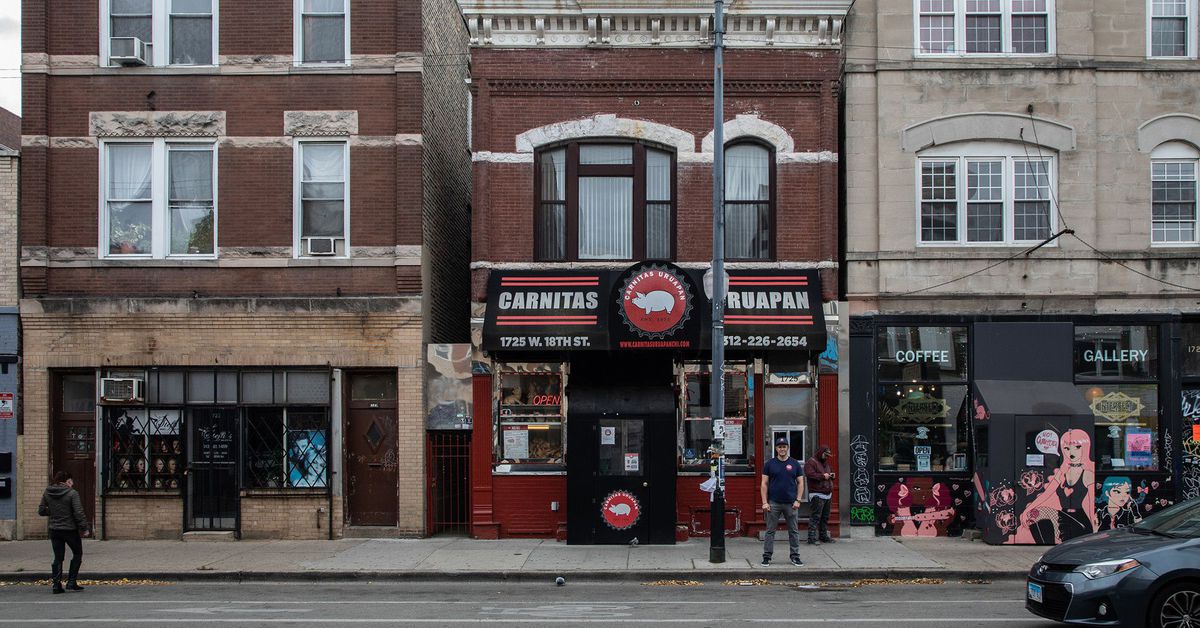 Sure, Lollapolooza sent publicists into overdrive last month sending photos of acts like Green Day, BTS and others dining out (OK, so it was mostly Lettuce Entertain You Enterprises restaurants in River North) . On Tuesday, the owners of Carnitas Uruapan, one of the city’s best-loved taquerias, paid a visit to their own celebrity. Move over Metallica, as actor John Leguizamo (Chief, Spawn, Carlito-style) stopped by 18th Street.

Marco Carbajal of Carnitas Uraupan says Leguizamo was taking a tour of Pilsen during his visit. Carbajal, whose father founded the restaurant in 1975, wrote on social media: “THANK YOU for your advocacy and for using your platform to transform the narrative of Latinos in the United States. You are a class act and an absolute legend. It was an honor to meet you today.

Carbajal tells Eater it was a quick visit but he was definitely blown away. Leguizamo recently made headlines after James Franco was cast as Fidel Castro in the upcoming film. Alina from Cuba, a biopic about Alina Fernandez’s life as Castro’s illegitimate child. Leguizamo objected to casting Franco, saying that while he has nothing personal against the actor, he “grew up in a time when Latinos couldn’t play Latinos in movies. Where Charlton Heston played a Mexican, where Eli Wallach played a Mexican, where Pacino played a Cuban and a Puerto Rican, where Ben Affleck, even, in Argoplayed Latin Guy and Marisa Tomei played Latin Women.

Much of the public response to Leguizamo has been fraught with the same criticisms seen when a white chef is accused of culinary appropriation.

Joe Flamm, the big name behind Italian-Croatian restaurant and Eater 38 member Rose Mary, has taken on an expanded role as culinary director at owner group Sancerre Hospitality, according to a rep. Flamm, who won season 15 of Bravo’s reality cooking competition, will continue to run Rose Mary’s kitchen while simultaneously managing restaurant operations at BLVD Steakhouse, Sancerre’s glitzy steakhouse in Fulton Market. BLVD has been hurt during the pandemic without a patio (they’ve since added outdoor seating), but the owner hopes the Flamm name will cause a stir.

A consulting event organizer for Riot Fest, the 17-year-old punk rock music festival that moved seven years ago from Humboldt Park to Douglass Park, has resigned from his post after a contentious meeting in early August that was apparently engineered to improve relations between festival organizers and residents of Douglass Park, according to the Grandstand. The meeting, detailed by the Chicago Reader, began on a sour note as residents felt it was poorly designed: set for 12:30 p.m. on a Tuesday, it had no agenda and did not include translations for Spanish speakers. An interesting note from Reader, was that food vendors serving football games at the park would not receive an impact fee to cover missed sales during the festival. Scott Fisher, the independent contractor hired by Riot Fest, further inflamed tensions by refusing to answer questions about safety and the reasoning behind the festival’s presence in the neighborhood.

Buona Beef and the Original Rainbow Cone, two beloved local brands with passionate fans, will expand beyond the Chicago area for the first time with the launch of a franchise program that aims to target franchisees in the Midwest. , Florida, Arizona and Texas, according to Crain’s. Buona, founded in 1981, and the Original Rainbow Cone, founded in 1926, forged a partnership four years ago and in the years since, the two have expanded to multiple locations.

Billy Zureikat, a Logan Square hobbyist pizza maker with muscular dystrophy, has raised over $9,400 over the past six months from the Muscular Dystrophy Association with “the Tripping Billy,” a Detroit-style pizza developed in partnership with the owner of Paulie Gee, Derrick Tung, according to the Grandstand. First invented in 2021, pizza and its creator have been popping up across the city at places like Table, Donkey and Stick in Logan Square, Pizza Friendly Pizza in Ukrainian Village and Pizza Fried Chicken Ice Cream in Bridgeport. A reformulated version of the breakfast sandwich appeared at Spinning J in Humboldt Park and Split-Rail in West Town, and the pie took the form of a hoagie at Tempesta Market in Noble Square and JP Graziano’s in the West Loop. On Sunday, August 14, Zureikat will host an all-day BBQ at St. Lou’s Backyard in the West Loop; he’ll be teaming up with famed pizza maker Robert Mileski August 18-21 for a pop-up at Uptown’s Milly’s Pizza in the Pan.

12 vegan Mexican sweets and treats you have to try