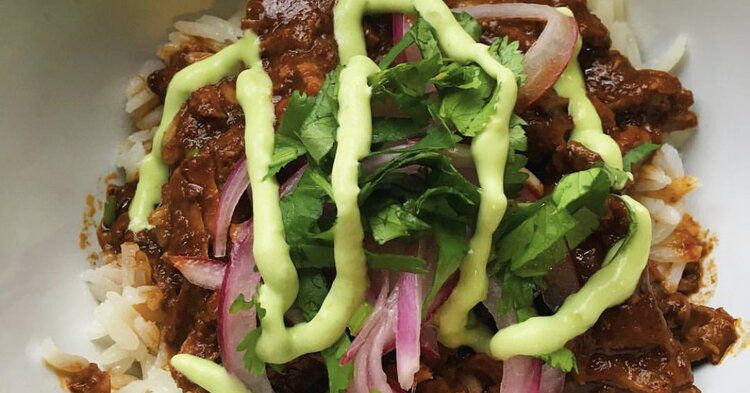 There’s a new counter food spot for slow-steamed Mexican meats at SoMa from a company born in La Cocina. It has been over a decade since Alma Rodriguez immigrated to the United States with her husband and two sons. At first, the cooking recipes of her childhood in Mexico began as a way to keep her family connected to their roots, but over the years she has grown into a successful Mixiote ephemeral and restaurant business – thanks in part to La Cocina, the nonprofit incubator that has helped dozens of women launch successful food businesses in the Bay Area.

Since joining the program in 2016 with the support of her son Arturo, who now helps her run Mixiote, Rodriguez had dreamed of finding a home for Mixiote. And as of this week, that dream has officially come true: Mixiocite’s first physical location is now open and celebrating its grand opening on February 15th. It’s a simple take-out-only operation inside Salesforce Tower East with a build-your-own-bowls menu featuring one of three slow-cooked proteins. It’s a streamlined version of the full-service restaurant the family hopes to open one day, but still something to celebrate, Arturo says. “It’s definitely a big blessing,” he told Eater SF.

The menu is short and sweet. Customers can choose from four bowls with different bases – a beet and quinoa salad, zucchini and carrot “noodles” tossed with cilantro pesto, turmeric-scented rice and cabbage in a lime vinaigrette, and a bowl of nachos on a base of tortilla chips. Each comes with one of three mixiotes, or proteins marinated in chili sauce and wrapped in maguey leaves before being steamed. The counter menu features chicken thighs marinated in guajillo red chili sauce; pork cooked in a pumpkin seed and green peppercorn sauce; or rajas, roasted poblano and red peppers in melted cheese.

The location has been a long time coming; According to Arturo, he and his mother started planning for the opening in 2019, long before the pandemic disrupted everything, when it would have been impossible to imagine San Francisco’s largest employer announcing its intention to leave its 10,000 employees working from home forever. Still, Arturo says the first days of service went well. “We have a lot more offers than we do for catering or when we eventually open our own restaurant,” he says. “It made us think outside the box and how we can make this space work and serve a different community than usual.”

Mixiote is located on the ground floor of Salesforce Tower East at 350 Mission Street and will serve from 11 a.m. to 3 p.m. Tuesday through Thursday.