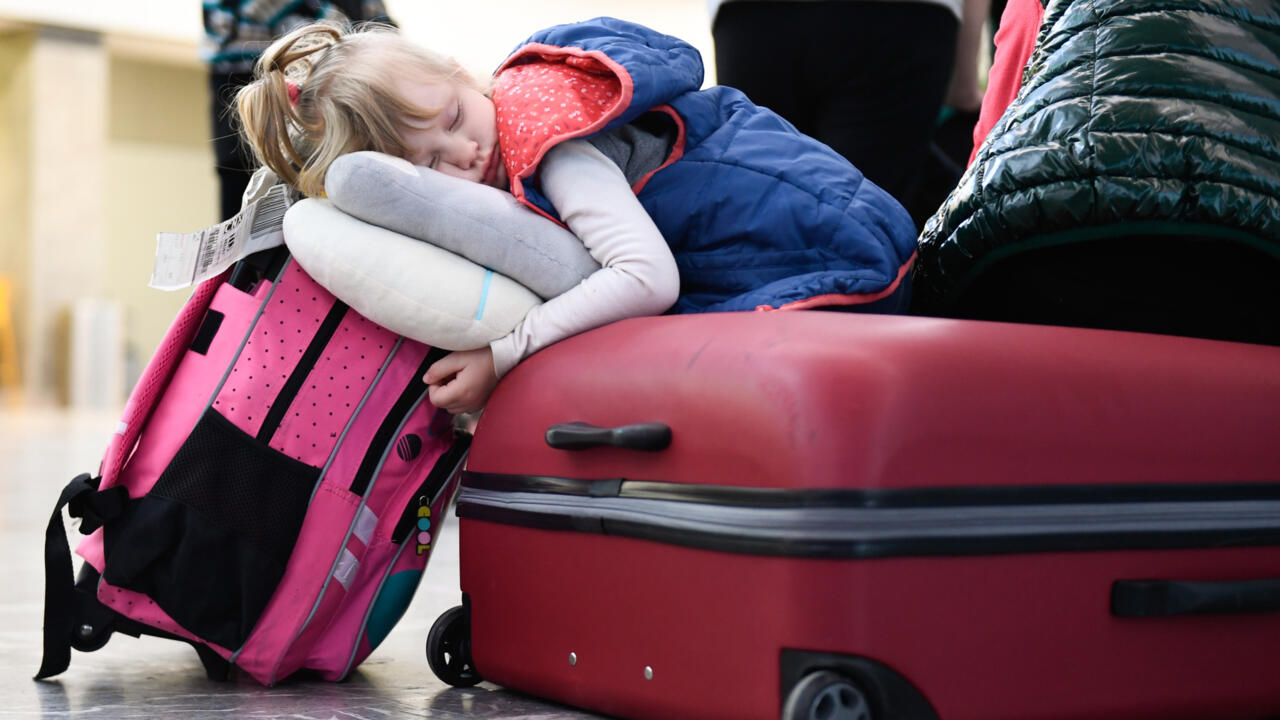 Tijuana (Mexico) (AFP) – Nadiya Ruyhynska had almost never left Ukraine, even though her daughter lives in the American city of Seattle.

But with war looming in her hometown of Lviv, the 55-year-old former nurse embarked on a long journey to the Mexican city of Tijuana, where a massive operation is helping thousands of Ukrainian refugees cross the border to relocate to the United States. states.

Most arrive with mixed emotions.

“I am happy” to find her pregnant daughter Christina, who has a young boy, but also sad to have left her own mother behind, she said.

Like Ruyhynska, hundreds of Ukrainians have reached the border town of Tijuana hoping to cross over to US soil – encouraged by a promise from Washington that it is ready to take in up to 100,000 Ukrainians who have fled the war .

Pavel Savastyanov, a Russian-born volunteer who helps at a support center for Ukrainians in San Ysidro, California, just across the border from Tijuana, said each flight to the region brings more.

The operation begins at Tijuana International Airport. The first thing passengers see when they walk through the arrival gate is a blue and yellow Ukrainian flag next to Cyrillic signs reading “Welcome” and “Help”.

In a small office there, volunteers register the names of new arrivals on a list – already bearing more than 2,300 names – for possible transport to the border.

“This is the first step,” said Sergio, a 36-year-old Ukrainian volunteer who declined to give his last name. He and his cousin had traveled 500 miles (800 kilometers) from Sacramento, the Californian capital, to help arriving refugees.

An area of ​​the airport is marked off with yellow tape. A sign in English and Spanish reads: “Ukrainian refugees only”.

There’s food and drink, and a play corner is set aside for kids with crayons and coloring books.

From there, the refugees are taken to one of four shelters that volunteers, with government and church support, quickly set up in this city that has long attracted thousands of Latin Americans. hoping to reach the United States.

“My father had to stay”

“My father had to stay behind,” said Anastasia Chorna, a 15-year-old from Ukraine, fighting back tears.

Sitting in a chair in the Benito Juarez sports complex, Tijuana’s largest refugee center for Ukrainians, she hugged the huge stuffed gray shark she had brought when she and her mother left home.

“It’s literally the only thing I could contribute,” she said.

Her father, who is 41, remains in kyiv. “I feel bad because I wanted him to be here, with these volunteers, where everything is so peaceful,” Anastasia said, struggling to speak a language that is not her own.

She and her mother had crossed four countries on the long way to Mexico, where obtaining an entry visa is relatively easier for Ukrainians than for the United States.

Some men have fled Ukraine, in violation of a martial law decree requiring all people between the ages of 18 and 60 to stay and fight on pain of conscription.

“I know I committed a crime, but I didn’t want to fight,” said a 25-year-old engineer, who declined to be named.

He had left Ukraine with his girlfriend, whom he had married the day the war broke out, and was now waiting for his number to be called for a bus to the US border.

“I never picked up a gun…I couldn’t kill someone or watch them die. I couldn’t,” he said crestfallenly in broken English.

For those who don’t speak English, a huge network of volunteers is there to help.

Twins Maria and Liza Melnichuk emigrated with their family from Ukraine 20 years ago.

When the sisters, now 26, heard of the influx of refugees, they hopped in their car to drive the 540 miles to Tijuana to join an active rotation of volunteers working around the clock. As Ukrainian speakers, they knew they could help.

“We are happy to see people coming,” said Liza, who was able to host her cousins ​​who had fled Bucha, the Ukrainian town now synonymous with accusations of extreme brutality under Russian occupation.

Her sister Maria said the number of arrivals was steadily increasing. “On Wednesday we received around 300 people, and already today (Friday) there must have been 700.”

A coordinated effort between Mexican and U.S. authorities has made the so-called Ped West entrance at the border exclusively available to arrivals.

Buses carry hundreds of people each day to a line where they are greeted by Mexican officials before crossing on foot to the American side.

Once on Californian soil, tears flow of joy and sadness.

“I don’t think there are words to describe what happened and how difficult it was,” Christina Ruyhynska said after a long emotional embrace with her mother – their first in three years.

The two women, wiping away tears, spoke briefly in Ukrainian.

Then, in English, Christina turned to her mother and asked, “Are you ready to go home?”

A policeman saves a man from a near-fatal wound

A bite and a hike to Giant Ledge in the Catskills