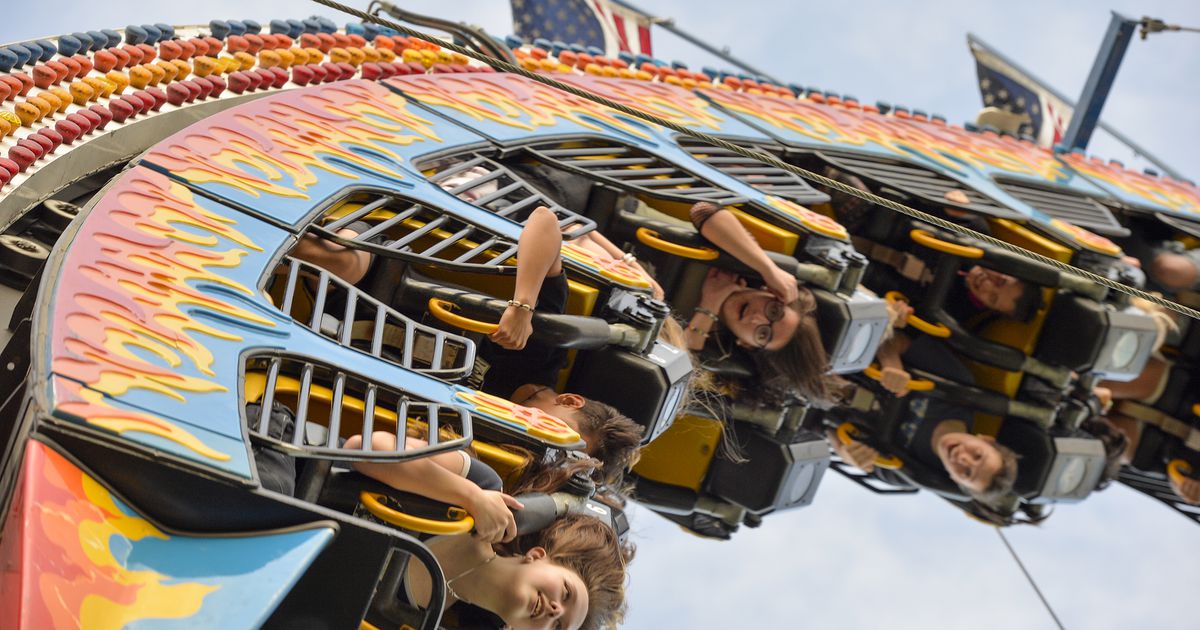 Community celebrations resume at 4 p.m. Friday at 5100 South and 2700 West in Taylorsville and continue through Saturday.

Taylorville • Even on a cloudy summer day, the smell of charcoal lingered in Valley Regional Park as families with children and dogs gathered and brought camping chairs and umbrellas for a rainy start to Taylorsville Dayzz.

Imagine, a Beatles tribute band, opened the festival’s main stage on Thursday with the West Valley Symphony. Shaking their bangs, The Beatles impersonators played classic renditions of the British band’s most popular songs, dressed in black suits fashioned in a 1960s style, as the symphony played and clapped along with them.

People got up and danced to many Fab Four classics. Some slowly nodded with serene smiles as the cover band performed their set to help kick off the three-day community festivities.

Friday’s Taylorsville Dayzz celebrations were scheduled to begin at 4 p.m. at 5100 South and 2700 West in Taylorsville, and end at 11 p.m. with a fireworks display. On Saturday, a 5 km race and a parade are scheduled from 7 a.m. The carnival, kiosks and various shows will continue until 10 p.m., the starting time of the pyrotechnic show.

For Misty Reiter, who lives in western Jordan, the tradition of setting up a few camping chairs on the lawn with her family to enjoy the festival’s musical offerings dates back to the early 1990s when she lived in Taylorsville.

While the food and carnival are great, the music “is the main reason I come,” Reiter said. “I love live bands and the impressionists they bring.”

She said she planned to attend the remaining days to see live covers of bands playing Dolly Parton, Shania Twain and Pat Benatar on Friday. But the most special event for Reiter, she added, will be Abbacadabra, the Abba tribute band on Sunday.

The music, Dunnigan added, is one of the main attractions of the festival.

“I had been looking for a good Shania for a few years,” he said. “And we have what’s billed as one of Shania’s best tributes… And then Abbacadabra, we had them three years ago and people were on stage dancing and singing ‘Mamma Mia’ and ‘Waterloo’ and ‘Dancing Queen.’ This is very fun.”

Other festival areas were filled with stalls with 30 different food options and 50 craft and exhibition stalls. From another stage, the beats echoed with an energetic tap-dancing performance and slow-paced Elvis covers. The occasional shout of joy echoed from the carnival rides.

“Thank goodness it just rained a little bit because we’ve been working all day in the sun and it’s really nice to be here for a while,” said Salt Lake City resident Roy Lopez. “Our favorite parts are the rides and the kids having fun.”

One of them is Ecologic Arts, a stand that sells hand-knit Peruvian sweaters, ponchos and backpacks. “We try to spread our culture. says Juana Ventura in Spanish. But the community component is one of the things she appreciates the most. “We’ve been coming for eight years and selling, talking and meeting our neighbours.”

As the sun set Thursday, the West Valley Symphony played the 1812 overture as the Utah Gunners of the Wasatch fired 17 cannons with the music.