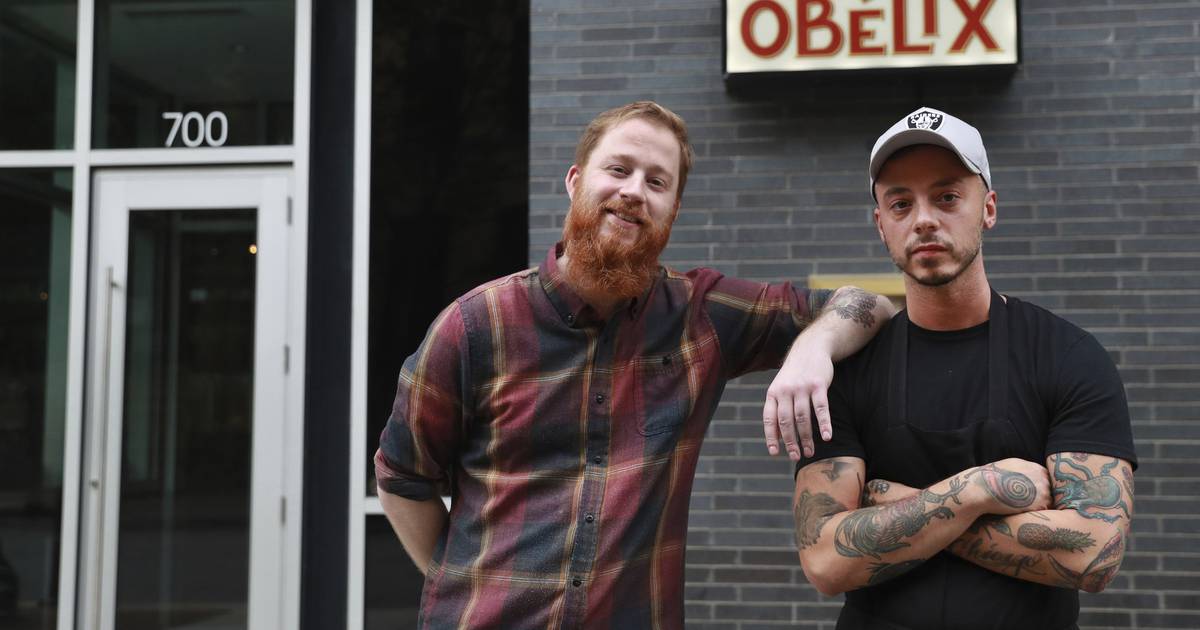 Let’s compare the Lyonnaise salad served in two restaurants of the brothers Oliver and Nicolas Poilevey.

At Le Bouchon, the undeniable Bucktown bistro open since 1993, the salad is in the spotlight. The bowl contains bitter leaves of frisée and escarole topped with crispy croutons, fatty cubes of bacon and a plump poached egg. But the execution is also rushed, with overly watery greens diluting the flavor, while fatty pork and egg yolk outweigh the weak dressing.

At Obelix, recently opened in River North, the Lyonnaise “duck” salad respects the basic formula of the recipe while avoiding specificities. The duck makes several appearances – a duck egg replaces the usual chicken one, the croutons are crunchy in duck fat, and the bacon bits are replaced with crispy duck confit beyond the point I thought physically possible. A ringing vinaigrette coats each curly and escarole leaf so the shine combats the admittedly greasy meat.

It’s not a contest which version is better.

I dreaded criticizing Obelix, because I would have to grapple with one of my less popular opinions about Chicago restaurants: I find Le Bouchon boring. I’m baffled when local food writers pick up on it. This overly creamy and buttery French food lands near the bottom of the things I crave.

Which makes Obelix all the more unexpected. This shows that the Poilevey brothers want a French restaurant free from tradition and the expectations that go with it. The more risk they take, the better the outcome.

I have never laid eyes on such a breathtakingly appealing steak tartare. Instead of a pile of brown, cubes of diced filet mignon sit on a leafy bed of green garlic aioli, while an assortment of pristine herbs sit on top. Chef Oliver Poilevey said he looks to Vietnam for inspiration. “I wanted a tartare that was light, but full of umami flavor,” he said. Thanks to a fish sauce reduction, every bite is incredibly meaty, but the aioli is floral, aromatic and slightly spicy. “It went better than I thought it would,” he said. That’s an understatement.

Seasonal soft-shell crab rarely disappoints, but this version, developed by Sous Chef Nathan Kim, always finds a way to accentuate the salty sweetness of the fried crustacean by coating it in a sweet chili glaze and serving with tapenade aioli.

But the most exciting moments come when Mexican and French influences collide head-on. That’s not entirely surprising since Oliver Poilevey teamed up with Marcos Ascencio a few years ago to open Taqueria Chingon, a taco shop that likes to serve blood sausage and duck. (I actually included the duck carnitas taco on my list of the best Chicago tacos, though I still wish the corn tortillas were a few millimeters thinner.)

It was at Taqueria Chingon that Oliver Poilevey dreamed up foie-co, a hilarious and indulgent yet irresistible foie gras taco. “We had a bunch of foie gras about a day, so I crisped the meat, then cooked the masa in the fat until it was crispy,” he said. . It is drizzled with a fruity and sweet cherry jam, as well as a mind-blowing salsa macha, which adds smoky, nutty and spicy notes. Although probably the priciest taco in town at $23, it’s a must order if you’re willing to splurge.

[ The 31 best tacos in Chicago, from Antique to Zaragoza ]

But the dish that really floored me was a seasonal side dish. Order the asparagus and it comes with a hollandaise sauce al pastor, a red-orange sauce that is deeply porcine and creamy, but also spicy and lifted with citrus. You could pour it over anything and I would dig with abandon, but it enhances the cool sweetness of asparagus.

“We have a whole bunch of fat melted al pastor every day at Taqueria Chingon, and I wanted to do something with it,” said Oliver Poilevey. “It really is liquid gold.” Instead of feeling forced, as many fusion dishes do, it’s an example of how saving money helped create a moment of culinary revelation.

Fans of traditional French fare will find a few favorites including French Onion Soup and a respectable rendition of steak frites. But above all, a visit to Obelix without a duck is a wasted visit. “Duck is my favorite protein for cooking,” Oliver Poilevey said. The 10-day dry-aged duck breast sounds simple, but the amazing dish features two remarkably tender pieces of meat placed alongside caramelized kohlrabi and a glazed turnip, with pickled red currants and seasoned sweet and sour gastrique de vadouvan (essentially a French version of an Indian spice blend).

Given the use of heat and acid in the menu of dishes, I was initially surprised that Nicolas Poilevey opted for such a decidedly French wine list, but he doesn’t see it from this way. “I don’t really like these monster wines that don’t go well with food,” said Nicolas Poilevey. “French wine likes to accompany food, so it was easy to work with the menu.” I particularly liked the lively but delicate glass of the Pinot Gris Emile Beyer “Eguisheim” 2019.

The other key player in Obelix is ​​pastry chef Antonio Incadella, who spent time at the now closed Spiaggia. His work is ubiquitous on the dessert menu, from the crispy mille-feuille to the baked Alaskan that’s set on fire next to the table. (“I love setting the fire,” Oliver Poilevey said.) But Incadella is just as nimble with savory dishes, including a surprisingly delicious strawberry tart, which balances the sweetness of seasonal fruit with salty whipped cottage cheese. .

Obelix takes the place of Entente, which closed in the River North neighborhood during the pandemic. The room’s high ceilings and neutral colors obviously don’t have the cozy, ramshackle charm of Le Bouchon – but it does mean the focus is where it should be, on the often wild and exciting food that pops into the room. ‘plate.

What to eat. What to watch. What you need to live your best life…now.

Note from the podium: 2½ stars, between very good and excellent

Accessibility: Wheelchair accessible, with bathrooms on the first floor