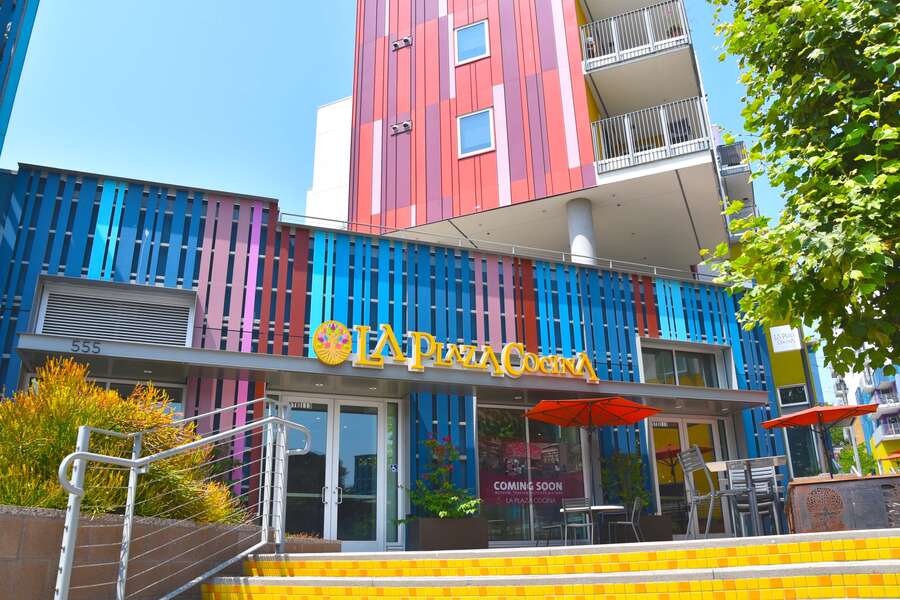 The stretch of Spring Street between 101 and Cesar Chavez Avenue is very different today than it was just a few years ago – where there were two largely unused parking lots, there is now LA Plaza Village , four colorful and mixed streets. -use buildings opened in 2019, with more than 350 apartments, commercial spaces on the ground floor and four large murals. But it’s not an unknown sight around LA; there are a lot of trendy apartment buildings going up all the time. The exciting part is tucked away in a courtyard in the southeast corner of the complex, facing the spring but discreet against the chaos of brightly painted apartments and the nearby highway – LA Plaza Cocina, a newly opened museum dedicated to the history and culture of Mexican cuisine.

LA Cocina opened in February with an exhibit titled “Maize: Past, Present, and Future,” a collection of artifacts, photographs, and text about the importance of corn. Why start with corn? According to Ximena Martin, director of programs and culinary arts at LA Cocina, it was nixtamalization – a method of treating corn with lime, which makes corn both more nutritious and more malleable – that allowed the empires to Aztec and Maya to flourish, providing the basis for civilization. As Martin says, “This very simple grain produced amazing empires.”

The history of the McRib

The gallery itself is a small space, but it’s packed with artifacts and information, thanks also to the co-curation of food historian Maite Gomez-Rejón. A walk through the exhibit reveals tools for milling and processing corn that have been used for centuries, such as metates, oloteras and millstones. There are also statues, urns and effigies from Oaxaca and Colima, celebrating the nixtamalization process and Pitao Cozobi, a Zapotec god of abundance and cornfields. There are cookbooks and wonderful photographs and, most importantly, a crate containing several different varieties of corn kernels, separated by color, size and original condition.

The “Maize” exhibit is ending its run at LA Cocina, but a new one is expected to replace it very soon. Details are still being finalized, but it will be a collaboration with USC professor Sarah Portnoy and her students, with a focus on grandmothers – matriarchs of indigenous communities, Mexican communities and Mexican-American communities. There will be photographs, recipes and a collection of meaningful culinary objects, all from different women.

“Objects tell stories,” says Martin, “It’s a work of art, this spoon that created so much.”

Exhibits are only one piece of LA Cocina, however. The space also has a full kitchen, set up facing the room as a stage, perfect for the next thing to come, with cooking classes starting in June. These will be divided into three general groups: The first is “Hecho con Amor,” a chef-led series featuring Los Angeles-based Mexican and Mexican chefs like Gilberto Cetina of Holbox and Jocelyn Ramirez of Todo Verde. Then there will be “Sabor A”, a series of deep dives in specific regions like Oaxaca and Jalisco. And finally, they will have “Prácticas y Pruebas”, a series of talks and informative lectures followed by tastings of the foods discussed.

Many of these culinary celebrations will be timed for specific events on the Mexican calendar. Martin is especially excited about the upcoming fresh corn season and they are planning a class based on uchepos, a kind of sweet corn tamal specific to Michoacan corn harvest festivals.

The other component of LA Cocina is LA Tienda, the museum shop. The store offers a wide variety of Mexican and Mexican-American artisan products like spices, cookbooks from local chefs like Jaime Martin del Campo and Ramiro Arvizu, mouth-blown glass pitchers and premium masa flour from Masienda. These cookbooks and products are a way to support the museum, of course, but they’re also an extension of their educational process, a way for Angelenos to bring home a bit of Mexican culture and culinary history.

Ben Mesirow is an Echo Park native who writes for TV, fiction, food, and sports. At one time or another his writings have appeared in The Los Angeles Time, liter, McSweeney’s Internet Trend, Los Angeles Magazineand engraved on dozens of desks at Walter Reed Middle School.