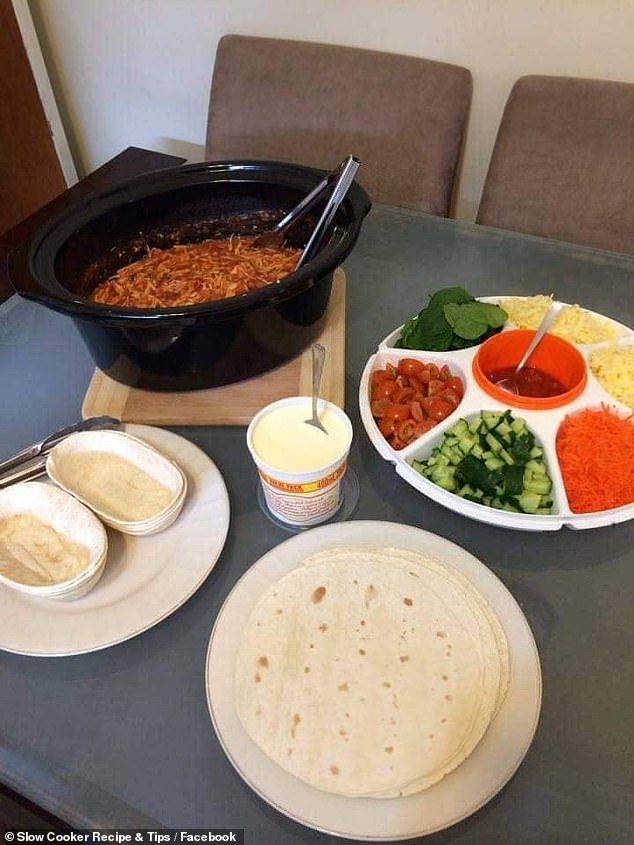 A popular foodie ditched his “best recipe card yet,” a version of spicy Mexican chicken that he promises will transform Tuesday’s tacos forever.

The home cook who runs a slow cooking page on Facebook shared the recipe on Tuesday night, inspiring fellow cooks to give it a try.

The Mexican Feast, which calls for chicken, beans, chopped tomatoes, salsa, and taco seasoning, can be recreated by anyone with a slow cooker and feeds eight people.

Popular Foodie Ditched His “Best Recipe Card Yet,” a version of spicy Mexican chicken that he promises will transform Tuesday tacos forever

To make the pulled chicken, the home cook cuts his chicken breasts into three pieces before placing them in the bottom of his slow cooker.

He then adds the rest of the ingredients on top, stirring them gently so that the chicken at the bottom of the pan is not disturbed.

After six hours, he shreds the chicken with his fork before serving.

A photo of the Mexican feast shows the simmered chicken served alongside chewy tacos, taco boats, salad, and salsa.

But he said it can be “served with anything”.

And his fans were in awe of the spicy spread, with many promising to “try the recipe” themselves.

How can I make this Mexican pulled chicken at home?

Cut the chicken breasts into three pieces, then place them in the bottom of your slow cooker.

Pour all the kidney beans on top, then add the chopped tomatoes.

Pour the two pots of salsa on top of everything else.

Gently stir the top sauces, don’t move the chicken from the bottom though. Basically, mix the crushed tomatoes a bit with salsa.

Stir vigorously and shred the chicken with two forks – it simply falls apart. Serve with your favorite sides.

“It looks so good for the crew when we have a packed house,” one person said.

Others were impressed by the cook’s use of a segmented Tupperware container for the salad.

Inside the server, the cook had sliced ​​cherry tomatoes, cheese, baby spinach, cucumber and carrots around a pot of salsa.

The Slow Cooker page is loved by 685,000 people who love The Cook’s easy-to-follow recipes.