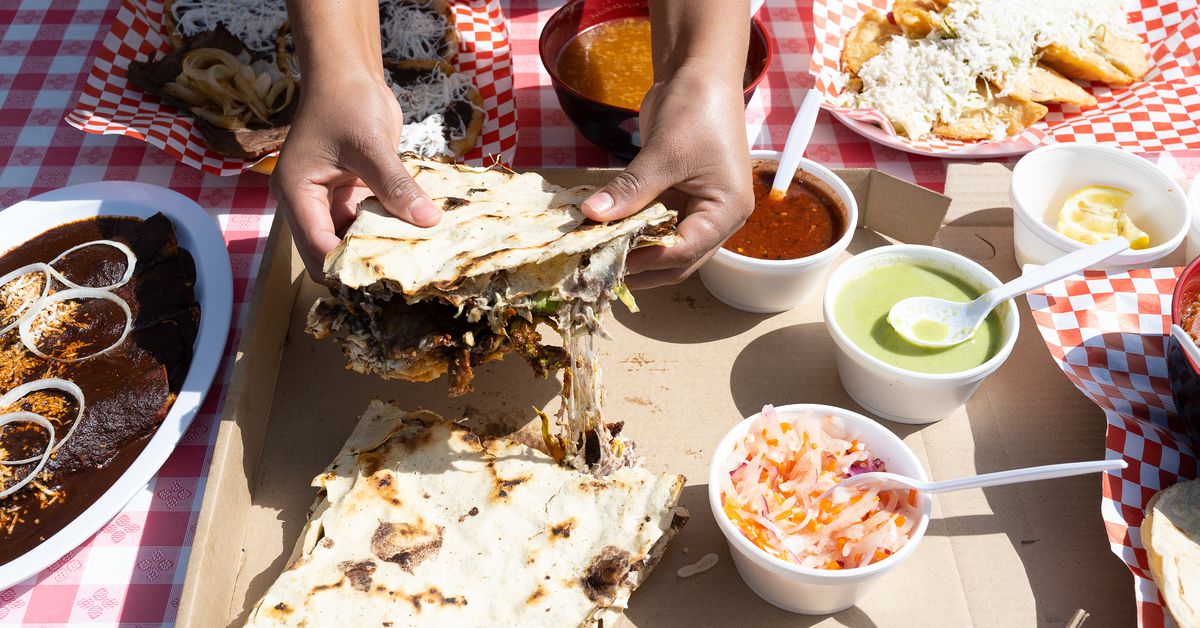 When taquero Javier Cruz opened his Oaxacan food caravan in 2017 in the Buena Vista neighborhood of San Jose, he had a plan: to tap into the fame of popular Oaxacan foods from the Valles Centrales and the appetite of South Bay for trendy Mexican bites like quesabirria to introduce regional barbacoa of Indigenous Mixtec culture of Oaxaca.

Cruz got off to a good start thanks to a video take of loyal customer and South Bay DJ Ricardo “El Pollo” Barragan (Radio Lazer): Barragan’s Facebook page – where he plays the pitchman for car dealerships in occasion and sellers of foreclosed homes – shows him digging into Cruz’s epazote flavored entomatadas (rolled corn tortillas covered in tomato sauce) and enfrijoladas (rolled corn tortillas covered in black bean sauce) well topped with avocado leaves. Five years later, Cruz operates a Mi Rinconsito Oaxaqueño food truck in San Jose and a trailer in Sunnyvale, bringing some of the best Oaxacan cuisine to the Greater Bay Area.

While the Bay Area is sparsely frequented by Oaxacan restaurants, San Jose is an indigenous enclave rich in Oaxacan communities, with many restaurants, trucks and stalls, according to Cruz and his wife Elvia Guzman, who practices the traditional mixtec cuisine. “San Jose has Mixtecos, people from Sierra Sur, Sierra Juarez, Istmo, Valles – a bit of everything,” Cruz says. The Mi Rinconsito Oaxaqueño logo, which consists of a map of the state of Oaxaca with its eight regions, acts as a welcome wagon for nostalgic customers arriving from the southern Mexican state. Cruz, who arrived in San Jose in 2000, has worked as a line cook at Italian restaurants and now manages the pair of trucks.

Cruz and Guzman were born in Sierra Sur, Putla Villa de Guerrero and Santa Maria Zacatepec respectively, but are Mixtecos. “Unfortunately, I did not learn the [Mixteco] language, but I am very proud to share a little piece of the Mixteca [region] with our customers,” says Cruz. Every Saturday is “sabado de barbacoa” or Saturday barbacoa, with masita (“yiki” in Mixtec), a rich stew of dried red chili peppers, gravy, thickened with cracked corn, which Guzman cooks in an underground pit.

Guzman first roasts the masita, along with the lamb consomé, in large pots over wood embers at the bottom of a dirt-covered pit, under large chunks of lamb, the juices of which are channeled into pots using maguey leaves. Most people are used to eating barbacoa tacos, but in Barbacoa Mixteca the custom is to eat masita topped with lamb barbacoa and on one side Guzman’s handmade corn tortillas. If you happen to be at one of Cruz and Guzman’s trucks when they have salsa de chicatanas, an extra smoky red salsa, seasoned and concentrated by flying ants, this is the perfect complement.

According to Cruz, Mi Rinconsito Oaxaqueño also boasts the best tlayudas in the Bay Area and South Bay, thanks to thin crispy corn tortillas imported from Etla, Oaxaca and Guzman’s black bean paste that “does all the difference” on this iconic late-night street. food dish. Guzman’s tlayudas are coated with asientos, quesillo, lettuce, shredded lettuce; fresh avocado and tomato slices; then topped with Oaxacan chorizo, cecina (pork in adobo) and tasajo (sack of beef) before being doubled and grilled on a comal.

Tlayudas and other Oaxacan dishes aren’t the only attractions of Cruz and Guzman’s trucks, however. Quesabirrias — made with birria and melted beef, the international Mexican dish of recent years — have broadened the appeal of Mi Rinconsito Oaxaqueño. Cruz says the dish is popular with a wide variety of South Bay diners these days. “It’s food that’s universal, something they’re all familiar with,” Cruz says. “There are many other Oaxacan restaurants around, they all have their flavor, but we serve home cooked food, and for us that is the most important ingredient.”

43% of customers say they would pay more for sustainable takeout