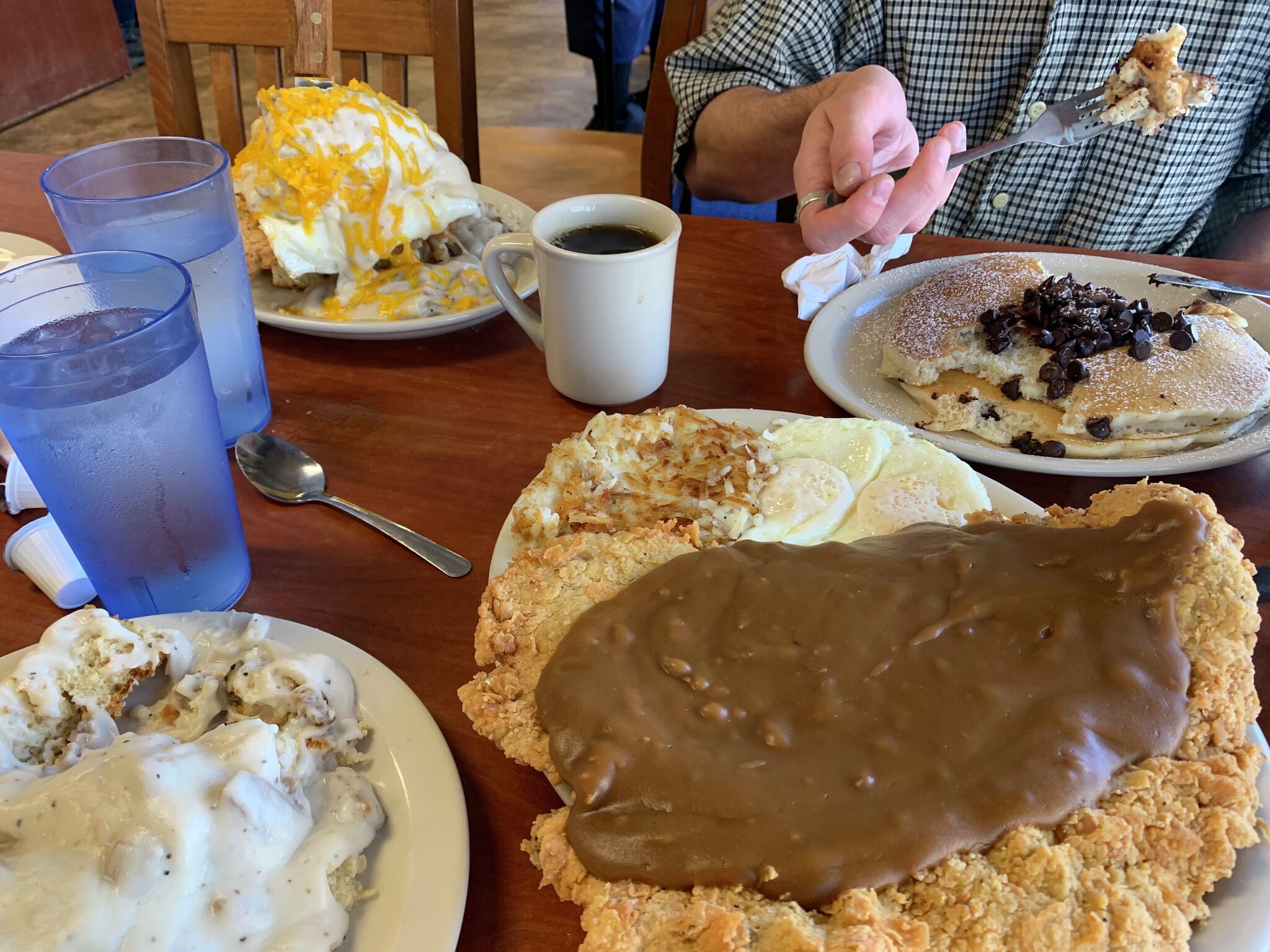 I don’t know if I’ve ever been to a place like this. A place where the food is so big that I had to start planning a strategy on how to fit it into a clamshell styrofoam takeout box as soon as it hit the table. Halfway through the meal, drinking my drip coffee became more about keeping my metabolism going instead of the usual caffeine reasons. Every time a new plate landed in front of us, my friend and I – half scared and half amazed – gasped on each other’s eyes.

Ok, maybe my brush with a LuLu jumbo cinnamon roller was similar. But on a Thursday morning in June, the particularly tiny Bobbie’s Cafe was filled with new diners and many grazers already intimately familiar with this particular frying experience.

We started with a made-from-scratch cookie smothered in white sauce, before moving on to fluffy French toast, classic chocolate chip pancakes and the biggest fried chicken steak I’ve ever seen. It reminded me of what I imagine an elephant’s footprint to be.

This is a carousel. Use the Next and Previous buttons to navigate

It may sound counterintuitive, but we decided it was exactly what the doctor ordered. The prescription had a lot to do with the atmosphere.

We bathed in the energy of the family heirloom taxidermy, which I was told was cut down by the original owners. We felt comforted by the modern and comfortable signs decorated with southern aphorisms written in script. We drank coffee that made us feel like we were sitting on the porch of a country cabin listening to the birds, and ate the food tailored to the footprint of the Lone Star State mythos. If I was a foreigner, I’d just go to see what it’s like to be a “real Texan” even for a day.

Alan Williams, a relatively recent Bobbie convert I reached out to, is smitten. “Even though I’m originally from San Antonian, I never heard of Bobbie’s Cafe until last year, but I fell in love with it. Walking into Bobbie’s is like stepping back into time,” he told me.

That’s sort of the deal. People seem to love the family restaurant that has been serving far south San Antonio for 50 years.

It’s not just about the Texas-sized portions (although it’s hard to look away from the sensible presence that is the chicken fried steak). The space seems to be sacred ground for the Ferris family, something I found contagious when it comes to foodie destinations. People want to feel part of something.

Bobbie’s story began in 1972, when Robert and Vida Condra, a Texas couple who ran an old-fashioned icehouse, decided to buy Bob Jones’ “Truck Stop” on Roosevelt, a major thoroughfare in the pre -Highway. days. They converted Bob Jones into an early iteration of the cafe, frequented by truckers, bikers, Southsiders and anyone heading north.

In 1986, their daughter, Bobbie, and her husband, Santo, moved operations to where they are today on South Flores (and also renamed it). Bobbie was a Southern woman through and through, I was told. She had her hair done every week in a Paula Dean-style poof and always said things like “you’re all crazier than a bull in a Chinese store,” according to her family. Her husband Santo was from Laredo. He showed his love in little ways like baking smiley pancakes and sprinkling some extra cheese on your carne guisada. He was also very handy in the shop.

When they were ready to retire, their daughter Nancy took over operations with her husband Randy Ferris. In January 2020, there was still time for change. 4th generation owner Greg Ferris has officially taken over the reins of Bobbie’s with his wife, Ana.

As a teenager, Greg spent his free time serving tables, commuting, washing dishes, and helping Santo fix odds and ends around the restaurant. His wife and McCollum High School sweetheart, Ana, tells me the Padillas were loved. Santo, who died several years ago, was her husband’s best friend. When the cafe closed every Tuesday and Thursday, Greg and Santo would religiously fix and deep clean the cafe.

“Then they went to B&B Smokehouse down the street and had Po’ Boys. That was their place,” Ana Ferris tells me, adding that Greg was also “the apple of Bobbie’s eye.”

Water point on the south side

Ana Ferris explains to me that especially on busy weekends, the community feeling of the place is amplified. People will make friends outside while waiting for their table. They’ll swap menu favorites, and sometimes solo diners can share a table.

“Old cowboys, you know, they’re really retired and tend to come in and out and sit together. They’ll be like, ‘Oh, do you want to sit at my table? I’m having coffee .’ “

I noticed some of this as I dined, watching small talk made across the room.

Notably, the food at this long-standing watering hole is also good.

Greg, who grew up in coffee, favors ingredients. Most of the menu is quirky, with offerings like cookies and gravy, chili, chicken fried steak, pies, and pancakes. Since taking office, Greg has worked to improve recipes to prioritize flavor and freshness, he tells me. This week, in honor of the anniversary, it’s also rolling out a series of new menu items, including Elvis-inspired “The Kings French Toast” with bananas and a delicate peanut butter and jelly sauce. and the colossal “Morning Wrecker”, a chicken fried steak topped with a runny egg, house biscuit, white sauce and grated cheese.

After 50 years of service, updates have been made intentionally to help maintain the integrity of Bobbie’s for decades to come.

“She was a firecracker,” says Greg Ferris, describing his grandmother after serving us some of her favorite menu items at her family cafe. “She was really what grandmothers are supposed to be.”

“Everything I learned, I learned from them. They kind of knew I was going to take over a restaurant, so they spent a lot of one-on-one time with me,” says Greg . “I’m just continuing what my great-grandparents started.”

Five decades after Bobbie’s started as a Southside truck stop, it’s still a popular place to dine in San Antonian. If you ever find yourself there, note the vintage cash register on the counter and the last fish caught by Santo Padilla hanging on the wall above.

If you happen to be there and order the chicken fried steak, here’s a pro tip: you’ll want to cut it in half and pile it up to put in your styrofoam shell. That’s exactly what we did when we were finally ready to leave, vowing to return.

The Ferris are grateful to everyone who has come forward over the years and helped make it great.