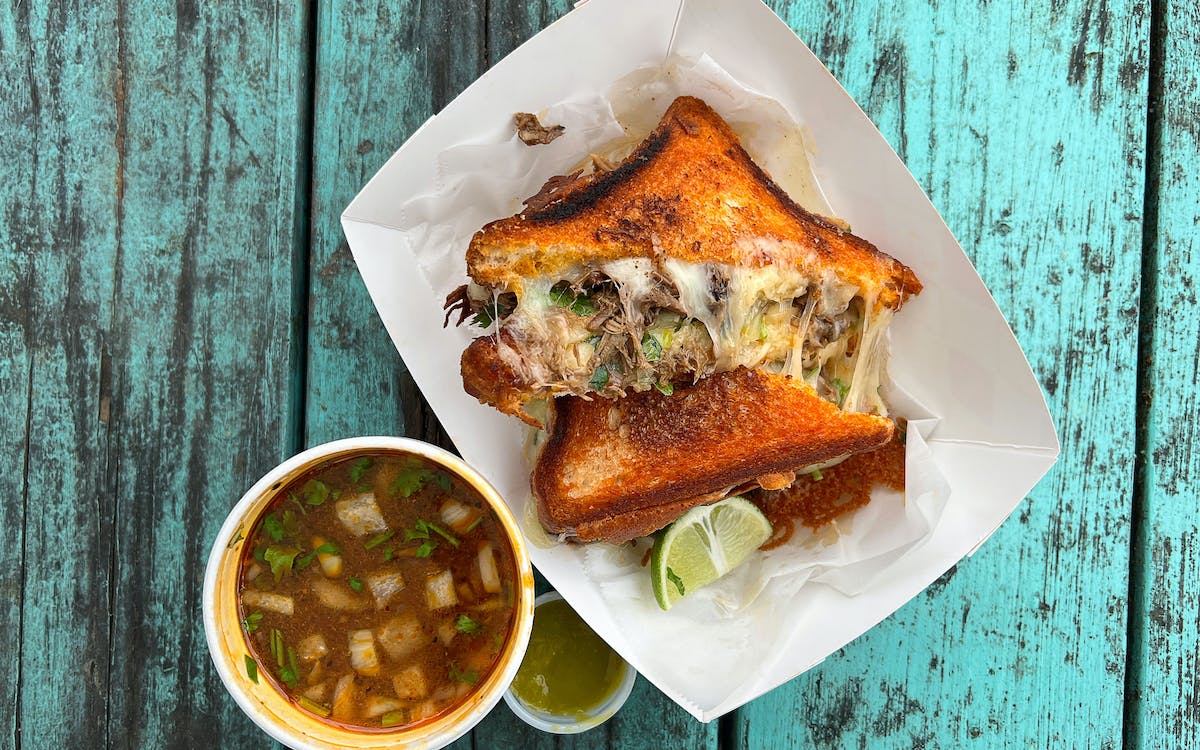 For Americans, there is perhaps no dish more nostalgic than a grilled cheese sandwich. In many Texas taquerias and restaurants, it’s taken up a notch with a Mexican influence, which can mean anything from toppings like birria and barbacoa to using queso blanco to hold it all together. .

I’ve spent months scouring Texas for Mexican grilled cheeses, and while they seem to be available in almost every corner of the state, excellent ones are surprisingly rare. Perhaps the most traditional and influential Mexican grilled cheese is that sold at Barrio Barista in San Antonio. “This barbacoa grilled cheese was a go-to meal for me,” says Tony Luhrman, a San Antonio native who frequented the cafe while attending nearby St. Mary’s University. The sandwich touched Luhrman so much that when he opened his El Topo truck in Houston, he paid tribute to it on its menu. (It’s also available at the El Topo brick-and-mortar store.) Luhrman’s sandwich, aptly called the San Antonio, is a fitting tribute to the Alamo City stalwart. But there are a few other grilled cheeses worthy of making pilgrimages.

Barrio Barista was opened in 2014 by Gilbert De Hoyos and his sons, Brian and Gilbert Jr. The West Side institution has the feel of an antique store, as it’s full of trinkets like typewriters, but it’s also a gallery, with the work of local artists for sale. Head to the coffee bar and order the sandwich of grilled Texan toast, a layer of barbacoa beef and perfectly melted American cheese. It’s a surprisingly light and lean dish, but you can add avocado for extra creaminess or ask for the Westside Special, which includes a warming bowl of tomato-basil soup. 3735 Culebra Road, San Antonio210-519-5403.

Birriería El Güero grilled cheese is stuffed with birria de res, which is spiced with a trio of chilies, cumin, black pepper and cinnamon. The mozzarella packs all the rich goodness, and the charred corners of the bread add crunch. The menu item is incredibly popular, says co-owner Leonard Paredes. “People are surprised it’s a trick and order it,” he explains. For an extra kick of flavor, peel the top slice to sprinkle with chopped cilantro and red onion. 3800 N. Zaragoza Road, El Paso915-232-7364.

Straddling rustic and fine dining, El Topo in the Houston-area’s West University Place takes food very seriously. Owner Luhrman oversees the process of nixtamalizing the tortillas and bakes the restaurant’s Japanese milk bread daily. For accessibility, the bread is listed as “Texas toast” on the menu. It’s a delicate yet sturdy bun seared in clarified butter and filled with a milky queso quesadilla that expands into stalagmite and stalactite formations and beef barbacoa that spills down the sides of the sandwich, reflecting the light in her knotted strands strewn with small bits of fat. 6119 Edloe University Square West832-795-7251.

In Austin, there’s no better birria grilled cheese than La Tunita 512, which is also home to the best birria taco in town. Both are served with a consommé on the palate punctuated with coriander and onions. You might want to slip a paper towel inside your shirt to avoid staining it with the vermilion broth as you dip the sandwich, which features guajillo-marinated brisket birria and costralike grilled cheese. 2400 Burleson Road, Austin, 512-679-0708.

Weekend-only Sarah’s Barbacoa is named after owner Sarah Hernandez, who was sixteen when she opened her small restaurant in 2019 along De Zavala Road. At the store in the center of the Strip, the lean beef barbacoa is served in a pressed oblong telera that shines like the jewel that it is. If you’re not washing down the sandwich with a Big Red, you might want to consider turning in your Texas ID. 6330 De Zavala Road, Suite 103, San Antonio210-263-9955.