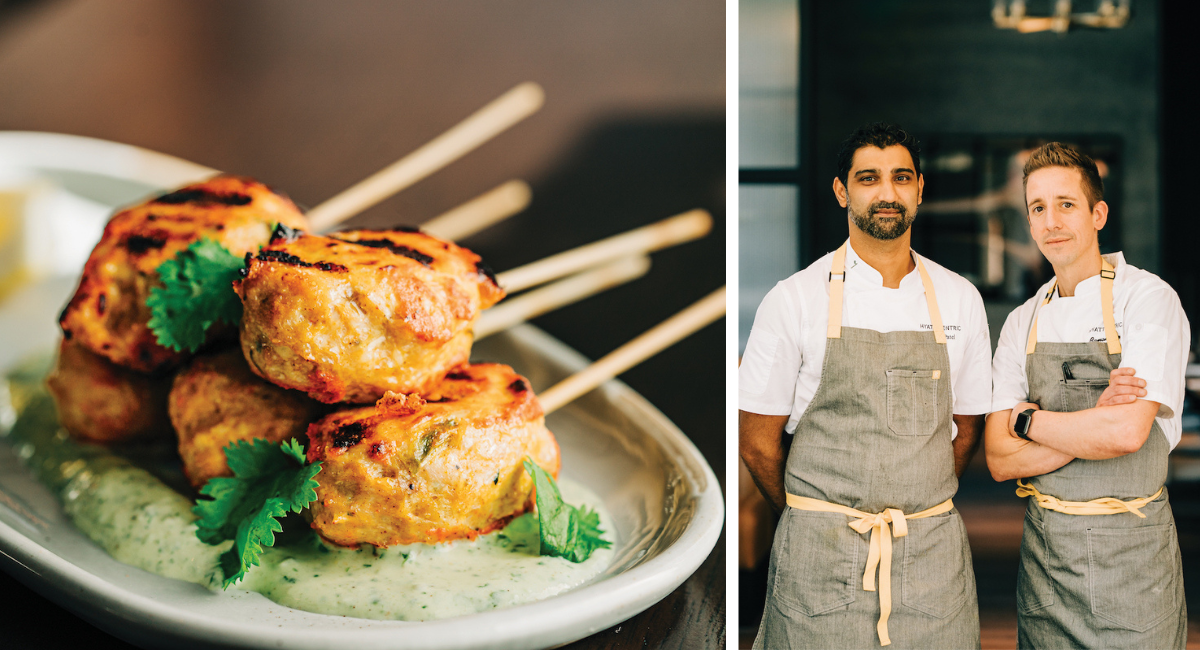 On a winter evening, my dining partner and I headed to The 7th Street Standard, the ground floor restaurant at the new Hyatt Centric Downtown Sacramento, British pop star Harry Styles was playing next door at the Golden 1 Center. The swarm of sidewalks, buzzing with youthful chatter, made our arrival at the restaurant, which opened November 4, all the more gratifying, if only for its relative calm. Like a breathless vision of upholstered leather booths, marble-covered tables and chairs perfectly suited to the herringbone upholstery, it was a quiet, polished harbor in an otherwise bustling urban environment.

The kitchen at 7th Street Standard, where California cuisine is lightly spiced with influences from executive chef Ravin Patel’s Indian heritage and enriched with his French training, also feels like a regional unicorn. Noting that Sacramento doesn’t really have a restaurant where diners can experience a ‘melting pot’ of these flavor combinations, Patel says, “A lot of chefs in town were like, ‘You should open something that has that.’ ”

Take chicken tikka masala, for example. Although the authenticity of the dish is disputed (after all, the origins of the 1970s Creamy Tomato Curry are most often attributed to an Anglo-Pakistani chef living in Glasgow and only cited as an original Punjabi recipe from time to time) , its value as a gateway food for those yet unindoctrinated in the vibrant world of spicy South Asian cuisine is indisputable. Patel puts his zesty twist on the beloved dish by infusing minced chicken thigh and thigh meat with garlic, ginger, roasted cilantro and fenugreek. The mixture is formed on skewers to make “lollipops,” as they are called on the menu, then grilled to order with a layer of homemade masala batter that echoes the spices already present.

Maine lobster roll with remoulade and celery on a charcoal bun. Along with other offerings from the bar menu (like chicken tikka masala lollipops), this dish can be ordered to your table. (Photo by Anna Wick)

“This [version] reminds me of those lamb skewers I grew up eating. A few uncles would get together to prepare them for special occasions,” says Patel, a Natomas native who trained at New York’s French Culinary Institute in the early 2000s and cut his teeth at the famed restaurateur new -Yorker Danny Meyer’s Union Square Hospitality Group before moving. returned to Sacramento in 2009 to work for the Selland family, first at Ella, then as Chief Culinary Officer of their group of restaurants, which also includes The Kitchen, Obo Italian Table & Bar and Selland’s Market-Cafe . In 2018, he joined Presidio Companies, the Presidio Companies hotelier of his cousin Sushil Patel, owner of the Hyatt Centric. (At the Clayton Club, the hotel’s sixth-floor speakeasy, named after the mid-century jazz club on the ground floor of the site’s former Marshall Hotel, chicken tikka masala stuffs tamales on the small plate menu.) 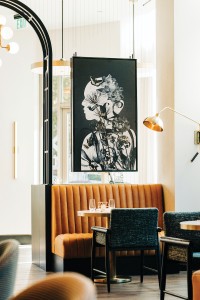 Another menu highlight with a strong family connection is the biryani rice, which is available as a side dish and accompanies the succulent entree of shoulder of lamb, in which the meat shines from braising for at least 12 hours in a roasted lamb bone broth enriched with cumin, anise seed and red pepper. “My mom used to make biryani rice once a month, but I deconstructed her recipe for the restaurant, taking something I liked to eat growing up and applying a different technique,” says Patel, who adds walnuts. whole cashews, za’atar gremolata and gin-soaked raisins with steamed and spiced basmati rice.

The chef also includes American standards on his menu that might appeal to the larger demographic that tends to dine at hotel restaurants – familiar dishes to enjoy in an unfamiliar place. But even these aren’t without their Patel-infused enhancements. The burger, for example, is piled high with two homemade ground beef patties and a strip of New York (Patel insists that doneness is only how long it takes the meat to render its fat entirely for flavor ), and harissa aioli as the proverbial special sauce.

The salads are seasonal and display the regional richness of farms like Riverdog and Full Belly. (Our delicious spiced roasted pears with frisée and fromage blanc were among the last of this fall fall, replaced by the quintessential winter combination of citrus-roasted beets.) A classic tomato bisque is a nod to Patel’s Selland days. . And the chicken and dumplings are inspired by his first taste of the cozy stew at a Cracker Barrel in the Midwest, his wife Ashlee’s stomping ground. Made with a rich green peppercorn sauce and sous vide chicken seared and drizzled with butter to order, Patel’s rendition may top the franchise favorite by a mile in flavor, but it’s still intimate at heart. “There’s no Indian in this dish, it’s just good old American comfort food,” says the chef.

By now you must be craving something sweet to read. Patel brought in his friend and neighbor from North Natomas, Dutch-born pastry chef and chocolatier Ramon Perez, who spent his formative years in Nevada City, where his parents owned and operated the former French bistro Citronée. Perhaps best known around town as the co-founder of Puur Chocolat, a line of travel-inspired European-style bars and candies he runs with his wife Nicole, Perez flaunts his baking prowess, honed in global restaurant from Los Angeles chef David Myers. network, from the Comme Ça brasserie in Las Vegas to the Sola pastry shop in Tokyo, to The 7th Street Standard. 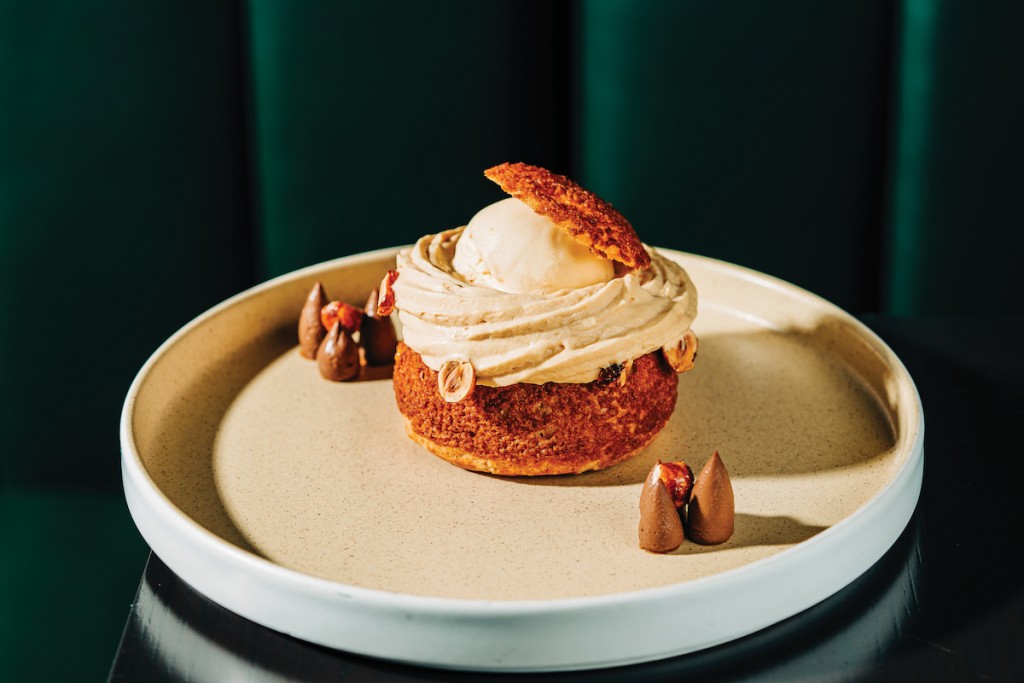 Namely, Perez’s chocolate donuts — filled with 64% Ecuadorian chocolate ganache that starts frozen and melts in the air fryer — cast a final spell over our meal. Don’t expect this bittersweet sorcery, which magically appears as an occasional special, to take the form of pillow-like donuts, but instead look like sprawling deep-sea creatures. And given that Perez’s cream puffs have been a pandemic hit (in 2020, the chef developed popular weekly versions for Origami Asian Grill in East Sacramento), it’s no wonder a crispy cracker puffs filled layers of hazelnut praline ice cream, 66% Mexican chocolate cream and salted caramel whipped cream occupy a privileged place on the dessert menu. Finally, the real finesse of the lemon tart is its ultra-thin shortcrust pastry, a delicate fortress that holds a voluptuous rise of pleated pastry cream and the melting filling of the confectionery, a bright green herb sorbet flavored with fresh tarragon , basil, parsley and fennel. fronds.

With remarkable technique and amazing flavors, the tantalizing and revealing cuisine of the new Hyatt Centric transcends the corporate ambience of a typical hotel restaurant. As for those friends who encouraged Patel to start a restaurant like The 7th Street Standard, they include other great chefs like Brad Cecchi of Canon and Oliver Ridgeway of Camden Spit & Larder. “I really appreciate Ravin’s style of cooking and the legacy behind his ideas,” says Ridgeway, who grew up eating Indian food in his native England, where chicken tikka masala is widely considered the national dish. “He has enough influence to open [this] restaurant. His time has come. »

Parklets are here to stay. Will East Oakland get more out of it?