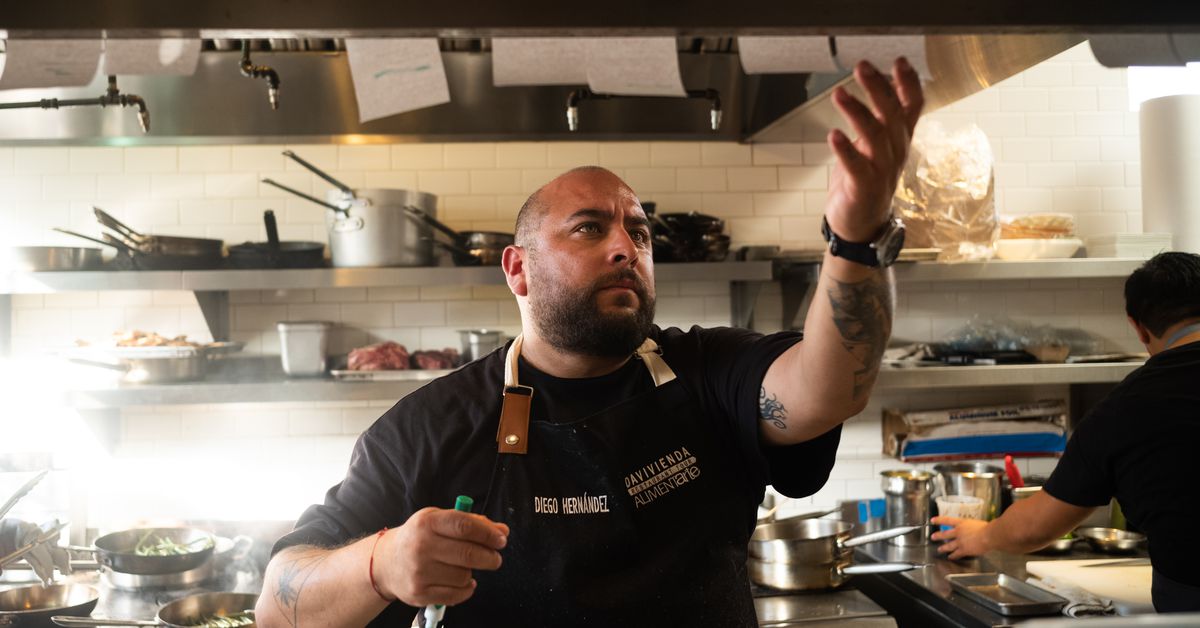 In 2017, celebrity Mexican chef Diego Hernandez caused a stir when he landed at the short-lived Verlaine in West Hollywood, which occupied Dominick’s former space. Hernandez made a name for himself in his restaurant Valle de Guadalupe Corazon of Tierra and was recently the leader of Ensenada’s The black beast, a high fidelity lounge bar with a small seasonal plate. Today, Hernandez landed as chef at Dudley Market, a seaside restaurant in Venice that sources much of its seafood from its fleet of fishing boats that fish nearby waters. Dudley, which was closed for a short time, reopened earlier this week with Hernandez at the helm.

Hernandez now incorporates much of his well-seasoned Baja-Mediterranean approach to the menu, though Dudley will keep some classics to suit regulars’ needs. Given his considerable talents as the former chef of a Latin America’s 50 Best Restaurant winner, Hernandez’s cuisine at Dudley Market is a boon to the Westside neighborhood.

Dudley Market’s updated menu includes a prawn quesadilla with ajillo spices, pickled cabbage and onions, while a line-caught tuna tostada comes with chimichurri. A striped bass taco or a tuna quesadilla shows the restaurant’s commitment to using as much fish as possible while adding flavors from Hernandez’s Mexican flavor arsenal.

Hernandez will team up with Dudley partners Connor Mitchell and Dina O’Connor, as well as Ray Wicks and Alexandra Purcaru, to create an LA version of La Bete Noire which they call Gray Area. With an even stronger trend towards grilled fish, meats and vegetables, Gray Area will echo the Ensenada Bar with high-fidelity tunes curated by local DJs paired with food in a space that will start the evening as a convivial lounge for dates, then open up to more standing room and mingle. Taking elements from Japanese listening bars and more scenic, laid-back environments, Gray Area is set to be a smash hit with music-loving Venice locals, who already have places like Winston House to listen to music with food. . The cocktail menu will get a consulting dose from Purcaru, who helped put together the drinks at La Bete Noire but became a bigger name thanks to his work at bar Oaxaca Selva, a North America 50 best bar this past year.

The Gray Zone likely won’t open until spring 2023 in the space adjacent to the Dudley Market on Dudley Avenue. However, the building has gained another item worth noting: Christopher “Nicely” Abel Alameda, a longtime barista at nearby Menotti’s, has opened a pop-up cafe called Hooked inside the space that serves all daily from 8:00 a.m. to 2:00 p.m. (closed Tuesdays) offering only natural espresso and drip processed coffees, with some of its signature coffee drinks also on the menu. All in all, between Hooked, Dudley’s new menu and Gray Area, the building just off Venice’s waterfront should bring a wealth of revitalized cocktails, food, wine and coffee to thirsty and hungry locals. .