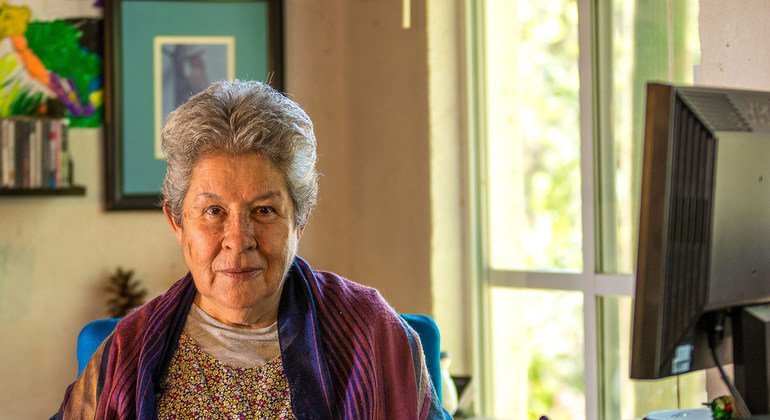 In the early 1980s, Pati had a successful career in Querétaro, located about two hours north of Mexico City, as concertmaster in the city orchestra, soloist in two choirs and music teacher at a prestigious school. private.

She decided she wanted to live a simpler life and moved her family to Sierra Gorda. This radical change meant giving up urban comforts, living without electricity for five years and developing a closer connection with nature.

And, soon after her arrival, she realized how badly the environment was being destroyed, with widespread tree cutting, uncontrolled fires and the indiscriminate opening of paths. This prompted her to work closely with the local community, replanting trees to bring back the forest.

Their activism eventually turned into a project to have Sierra Gorda declared a protected biosphere reserve, which involved lobbying the state governor and trying to secure state funds and of the federal government.

A resident of Sierra Gorda harvests vegetables produced in a sustainable project.

“We are the only protected natural area in Mexico that was designed from the bottom up,” says Pati: Before submitting this petition, 130 meetings were held with community members to obtain their consent and, when they all accepted, the official request has been accepted. at the highest national level.

Success came in 1997, when Sierra Gorda was designated as part of the Biosphere Reserve, exactly a decade after mountain communities, led by Pati and his family, launched the Sierra Gorda Ecological Group in as a civil society organization, giving them a formal mandate to conserve biodiversity and raise funds to put their plans into action.

The protected area covers almost 385,000 hectares, almost a third of the state of Querétaro. Once the biosphere reserve status was obtained, the projects of the Ecological Group, including environmental education and reforestation activities, began to develop, and even to extend to certain areas of the Sierra Gorda outside of Querétaro. .

Among the group’s most recognized programs is one related to sustainable forestry. It is based on a program called Payment for Environmental Services, which also monitors carbon in the forests of Sierra Gorda.

Miguel Flores Pedraza, a 60-year-old forest owner, has been involved in this project for a decade, dedicating his land – around 100 hectares – to conservation.

“I received support for payment for environmental services or carbon capture and other benefits, leaving the land in its natural state so it could be regenerated,” he says.

“This project has helped us a lot since it’s an income that compensates us” he explains and gives a concrete example of what it is possible to do: “If I brought five or ten head of cattle, graze on this land, it gave me an average profit of 50,000 pesos. This is exactly what I receive today for the payment of environmental services by the ecological group. “

“It satisfies me economically and also made me aware of ecological issues. I liked to see that the environment is enriched, that ecosystems are reconstituted, and that the diversity of flora and fauna is increasing. Today oday on my land I see wild boars and pumas which, thirty years ago, did not appear in this region.

School children in Sierra Gorda, Querétaro, Mexico, learn to respect the environment in a classroom while enjoying locally produced food.

An example is ecotourism, which started successfully in an area called Cañada de las Avispas, used for beekeeping.

“We started the adventure by building cabins,” recalls Pati. We had a great team and created some beautiful cabins. I can’t imagine the work that has gone into this project!

For Pati, the best weapon to defend and restore nature is education, which is why, 34 years ago, she started touring mountain schools with an accordion, singing with the children and educate them about the environment. Today, in the hands of teachers, the program operates in more than 150 schools in the region.

The result is that the general population is now aware of the issues and, in some municipalities, cabinet members are environmentalists.

“If you go to the market and talk about the zero waste campaign, people know what it’s all about. Traders are supportive of the campaign and ask people to bring their own containers and baskets. There’s no denying that environmental education works,” she says.

“The key characters are the teachers,” she points out, arguing that the only hope for the planet is one that can be generated with a different vision, “nurturing children’s love of the earth.”

This story is part of the UN News multimedia series featuring prominent women leading initiatives for a more sustainable and equitable future, published ahead of this year’s International Women’s Day on 08 March.